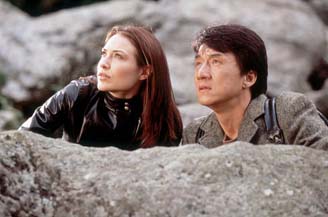 Even if you first travel to Tibet, take a vow of silence in order to train with the Buddhist monks, learn the true path to enlightenment, and achieve nirvana, the performance of Lee Evans in The Medallion will still somehow manage to break down your defenses and eliminate your will to live. At the end of this insipid acting effort, the only satisfaction I could have received that would have been acceptable was his head on a pike as I exited the theater. Never in my life would I have imagined the sheer volume of loathing I could grow to have for one character in a single 88 minute film. While the experience opened my conscience to a new level of self-discovery, it in no way changes the fact that my single concern here is to make sure that you don't make the same mistake I did and naively show up at a theater in order to bear witness to this monstrosity. Donít Do What Dumb David Did.

Donít get me wrong. The Medallion does have moments of entertainment inter-spliced with all of the forced comedy nonsense. Itís just that there are far fewer of them than I have come to expect from a Jackie Chan Hong Kong production. Gone are the magnificent stunts of his youth. The replacements are the sort of wire work and camera tricks which were exactly what used to be railed against by the acting worldís human highlight reel.

The Medallion ostensibly tells the story of a magical dual-sided emblem which may be combined once per millennia by a chosen one. As it turns out, the chosen one bears striking similarities to The Golden Child from the 1980s. He has the power of life and death in addition to being the only one who may unite the jewelry. Of course, evil doers want to possess his abilities because thatís what nefarious types are into these days. Chief among them is Snakehead (Julian Sands), who leads a tiny company into the depths of a hidden temple in order to obtain the boyís shiny bauble.

As it so happens, Interpol incompetent Arthur Watson (Lee Evans = I HATE YOU) has inexplicably been placed in charge of an elite military strike force. They have been assigned the task of capturing Snakehead and his men and saving the day. As it so happens, this company has been forced to work with a Hong Kong super-cop named Eddie Yang (Jackie Chan). When the good guys meet the bad guys, Yang is the only one to have any success with Shakeheadís strike force. His staving off of their first attempt at stealing the mystical heirloom guarantees that he will be forced to face Snakehead at some point down the line to determine who will gain permanent possession of the medallion.

While it certainly reads like any one of 200 other martial arts/action films, The Medallion tries to set itself apart from the pack thanks to the pedigree of the usual amount of Jackie Chan stunts as choreographed by long time collaborator Sammo Hung. The two legends of Hong Kong cinema have already secured their places in the Action Stunt Hall of Fame, but the idea here is to update their schtick for jaded modern action film fans and it just doesnít feel right. In particular, the final act has incongruous segments involving a sped up camera frame rate presented in order to make the moves of the fighters appear to be a blur. The effect of it is simple. Audiences canít clearly tell what is going on. Thatís inexcusable, particularly for a film whose main selling point is accessible action sequences. Just as disappointing is the fact that the early portions of the film involving classic Chan maneuvers offer nothing new that he hasnít done before in other films. If youíre going only for the stunts, donít bother.

There are positives in the movie. Julian Sands is as sinister as ever in this, the umpteenth consecutive villainous role of his career. He might be typecast but at least heís strong in his element. Claire Forlani is her usual breathtaking self in the film and despite the obvious age difference between her and Chan, she still manages to make for a believable significant other. And then there is the real highlight of the movie, Christy Chung, who has an all-too-brief cameo as Arthur Watsonís wife, Charlotte. For reasons that the writers forget to make clear (I would anticipate a deleted scene or two on the DVD), Chungís character has some unexpected surprises in store for those who visit her domicile. By no accident, itís also the best sequence in the movie and not just because Lee Evans doesnít talk much during it.

Why am I so against the performance of Evans? His role maintains all of the normal clichťs for a bumbling detective paired with a Hong Kong super-cop, but the British comedian is also hammy even by Asian cinema standards. He wants to be Rowan Atkinson so bad he can taste it but the reality is that Lee Evans couldnít sit on Mr. Beanís whoopee cushion. No amount of words I use here could do justice to the heinous nature of his performance but suffice it to say that if I ever see him in public, Iím going to need a great defense attorney.

On the whole, The Medallion should feel like what it is, one of the most expensive Hong Kong productions ever, but instead it comes across as any other Chan movie you would expect to see on TBS at 3 a.m. In fact, it would be one of the more disappointing of those outings. I love Jackie Chan but after The Tuxedo, Shanghai Knights and now this, he desperately needs a hit. The Medallion is a lock for my bottom five films of 2003. Remember, kids: Don't Do What Dumb David Did.