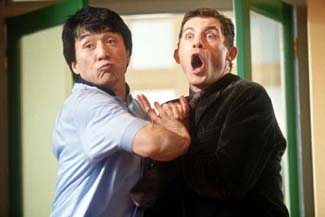 I love Jackie Chan. That’s why it pains me so badly to discover that there is absolutely nothing good about his newest film.

Admittedly, after having been burned badly by last year’s deplorable The Tuxedo, I didn’t have particularly high hopes for The Medallion, a film that had seen its name changed because the original title, Highbinders, was thought to be confusing, not to mention the fact that it had been pushed around the release schedule numerous times before finally winding up in the studio dumping ground known as late August. Sadly, not only does The Medallion manage to throw under The Tuxedo, but it even challenges 2 Fast 2 Furious for worst movie of the year.

Just how awful is The Medallion? Let me count the ways.

First and most glaring is the complete lack of any sort of cohesion. This is clearly a film where editors left a substantial amount on the cutting room floor, making for a very confusing sequence of events. Jumping from one scene to the next with no sense of logic, certain plot points are never explained, leaving the viewer in a constant state of befuddlement. Does it want to be The Golden Child or Highlander, comic ghost story or super hero movie? It tries to be an amalgamation of everything but ultimately winds up being nothing.

The other particularly grievous element of badness is the usage of spectacularly terrible special effects. It’s like someone saw The Matrix and Crouching Tiger, Hidden Dragon and wanted to rip them off as cheaply as humanly possible (and that’s despite the fact that The Medallion is one of the most expensive Hong Kong-budgeted movies in history). Unfortunately, even though I’m fond of him in a general sense, action director Sammo Hung is just no Yuen Woo-Ping, and the action sequences in the film are very lackluster. There are very few of the trademark humorous Chan fight scenes (though to be fair, he’s just not a spry as he once was) and in recognition of that fact, director Gordon Chan has ramped up the wire work along with lots of slow motion and wuxia effects to compensate. It’s a huge step backward in comparison to some of the more slickly produced action flicks coming out of Hong Kong recently.

As for Chan, he gives it his best shot and has a couple of comic moments, but he’s mostly at the mercy of the pure awfulness of the whole thing, which is exacerbated by the presence of British comedian Lee Evans as the “sidekick.” He’s really, really horrific in this role, with attempts at humor falling very flat. I groaned inwardly whenever he was onscreen and actively rooted for him to meet an unfortunate and early demise.

Surprisingly, Claire Forlani was not unbearable, though her character didn’t add a lot to the mix, either. She’s there strictly as love interest to our hero, but oddly, her fight scene is actually the best one the film has to offer.

Also on hand is Julian Sands as the movie’s super-villain. We’re never given much background on him, though apparently he’s been really bad news for a long time as far as Interpol is concerned. He’s far too over-the-top for my tastes, with an exaggerated Snidely Whiplash approach to the character’s evil tendencies. He does have a cool jacket, though.

The mess is tied together with a rotten theatrical score. The music is always too noticeable and frantic, never feeling quite appropriate to the action that it is supposed to be complimenting. It frequently took me straight out of the movie, which is a very bad thing when I’m not that much into it in the first place.

Though I’m usually fairly forgiving and at least able to pick out a few good things in most movies I see, The Medallion simply offers nothing. It’s not even bad in a fun way, with real laughs being sparse and humor at the expense of the stars being nonexistent. Avoid at all costs, even if you’re the most dedicated of Chan fans.