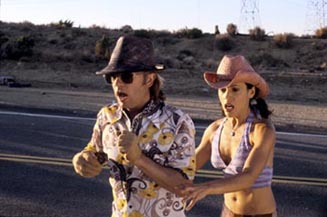 Dickie Roberts is a measurement of the good and the bad. The decision to be made by a reviewer is whether the first five minutes of the movie combined with the closing credits is enough to suffer through the 90 minutes sandwiched between these high points. For me, the answer is yes, but I think for most audience members, it’s going to be a resounding no.

The title character is played by smug, effeminate SNL retirement home member David Spade. In this role, he is a 30-something man(?) who had his moment in the sun all the way back in the 1970s. He was the child star of a family show, and his catch phrase, “You’re nucking futs!” is a fictitious answer to the “Whatchu talking 'bout, Willis?” era.

In the quarter century since then, Roberts has entered the same awkward period that all of the real-life child stars from the era faced. He receives little social acceptance and is reduced to poker games with other Norma Desmonds-in-training such as Barry Williams (aka Greg Brady), Leif Garrett and that guy who played Screech (whose real name, Dustin Diamond, you wouldn’t know anyway). The conversations in these endeavors center upon discussing the good ole days when they had fans and limos.

During one of the card games, Dickie discovers that noted director Rob Reiner is auditioning for a part which would redeem our hero and put his name back into the Hollywood spotlight. Unfortunately, when Dickie reads for the part, Reiner lets him know that what’s holding him back is the lack of experience from a real childhood. Since he grew up in an insular environment, the child star has no idea what it’s like to be normal. This leads Dickie on a quest to re-live his youth by hiring a family to pretend he is their scion.

If the description doesn’t send you running, what happens from there is mundane but mostly harmless. Spade’s character finds a selfish money grubber to bribe. The family man and father of two willingly throws the chaotic force of Dickie Roberts into the normalcy of his home life in order to advance his career as a car salesman. The fact that this already single dimensional character is played by Craig Bierko, one of the worst actors in the world today, says all that needs to be said about how much effort is put into developing the token Bad Guy.

More important to the plot is the presence of Sam and Sally, the precocious blue-eyed, blond-haired children. They are there to humanize and eventually redeem the selfish Hollywood actor by showing him how the real world works. As much as I would like to mock their presence, child actors Scott Terra and Jenna Boyd are the best part of the movie. It’s probably thanks to the foundation of knowledge available from the Poker Table group, who were likely hangers-on at the daily shoots.

Both the children have the usual problems for kids their age as Sam has a problem with a bully and Sally has self-esteem issues stemming from a rival kid with a Britney Spears complex. As Dickie teaches them how to overcome their obstacles, he is naturally involved in a series of unlikely situations rife with comedy potential. The only good news I have here is that he is roughed up pretty good in the scene where he rides a bike, so all you David Spade haters have a reason to check it out on video.

The x-factors in all of this are Dickie’s ex-girlfriend, Cyndi, and the mother of his faux family, Grace. Cyndi is cleverly cast with recovering child actor Alyssa Milano portraying the Token Bitch. Grace is the awkward love interest in this piece, so if incestuous Oepidal cuckolding is your thing, boy howdy, are you ever in luck. It’s obvious inside of ten seconds where Dickie stands on the subject. The fact that he could ever get either woman is one of those movie suppositions you’ll just have to accept. It’s no more unlikely than Spade getting a lead acting job anyway.

What’s good in Dickie Roberts are the opening sequence of Celebrity Boxing, the end credits video and the dance recital sequence. Alas, to say anything more about any of these things would be to spoil what little fun there is to be had in the movie, so I will simply say this. As bad as the rest of the movie is, those ten minutes are so well-conceived and amusing that I can say in good conscience that you will laugh hysterically to the point that you might walk out of the movie satisfied. The end credits are a strong contender for the funniest scene of 2003. I was in stitches during that segment, and cannot stress strongly enough that if you are going to spend money on this movie, make absolutely certain to stay until the end.

On the whole, Dickie Roberts: Former Child Star is very similar to David Spade’s last feature, Joe Dirt. It’s not ever going to be confused for a cinematic classic but there are enough funny moments to stop the pain from the clichés smothering the rest of the film.