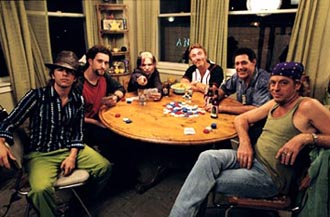 As Gary Coleman makes a real run at the governorship of the State of California, the timing couldn’t be more perfect for the release of a movie that examines the perils of being an adult who was once a child star. Though I find David Spade to be a very hit or miss comic actor, I was surprised to find that Dickie Roberts: Former Child Star is a charming and humorous ode to those entertainers who dedicated their youth to making audiences smile.

As the title implies, Dickie Roberts is the story of a grown man who can’t quite get past the glory days of his star-studded youth. Unable to get any acting jobs, he now parks cars at a swanky restaurant, hoping that someday his big break will arrive. It shows up in the form of a movie that is being directed by none other than Rob Reiner, and Dickie makes a frantic effort to get to read in front of Meathead. He succeeds despite the doubts and cajoling of his other former child star cohorts (there are a number of cameos in the film and they’re really best left as surprises).

Our hero is dismayed to discover that even though Reiner believes Dickie is perfect in appearance and mannerisms for the part, the director just doesn’t believe that the former sitcom star’s background allows him to properly understand the character. Because of the strange and unique turns his life took, Dickie never really experienced the joys of childhood. Commonly accepted events like riding a bike for the first time or seeing toys under the tree on Christmas Day were just never a part of Dickie’s existence.

Determined to discover the things he missed so that Reiner will see him as appropriate for the part, Dickie embarks on a cunning mission to hire a family that will treat him as their own child. His chosen group winds up being a fairly typical suburban bunch, with a father who’s never at home along with a devoted mother and two children, a boy and a girl.

Other than shifty father George, who is clearly in it for the cash, the rest of the Tracy family is reluctant to accept Dickie. The mother, Grace (played by Private Parts star Mary McCormack) sees him as exceedingly strange and a terrible influence on her impressionable young children. That’s not really a huge worry, though, because Sam (young Daredevil Scott Terra) and Sally (Jenna Boyd) both think that their new “family” member is beyond weird. Naturally, the more the Tracys get to know Dickie, the more they begin to find that maybe there’s something special about him after all.

Really, the story doesn’t break any new ground, but what does work very well in the film is Dickie’s transformation from annoying dolt to sympathetic oddball. As an audience member, it’s easy to understand why Grace, Sam and Sally are annoyed by Dickie early on, because Spade does play the character fairly over-the-top, embracing all the eccentricities of a person who’s led a life not quite normal. As the movie progresses, though, Dickie grows on the viewer, and rather than being a one-note joke, the character is surprisingly layered.

I am inclined to compare Dickie Roberts: Former Child Star to the Jake Gyllenhaal vehicle Bubble Boy. Both are films that critics will probably ravage, but ultimately are fantastic, guilty pleasure fun, with quirky comedy and a slow-building appeal.

I should note that it is absolutely imperative to stay seated for the closing credits. This end scene is absolutely uproarious and fans of ‘70s and ‘80s television will be delighted by what transpires. It’s a very fitting close to a cleverly executed concept