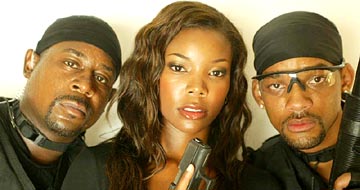 If the NRA were ever going to produce a big budget Hollywood movie, it would look something like Bad Boys II. Shamelessly loud, inconceivably violent and recklessly xenophobic, the movie is not without its moments but it's impossible to whole-heartedly endorse in good conscience.

Marking the return of the studio system's holy triumvirate of Will Smith, Martin Lawrence and Michael Bay, Bad Boys II follows in the well- worn footsteps of its predecessor by offering a dizzying mix of comedy and ultra-violence. What the original had in spades was chemistry as buddy cop detectives Marcus Burnett (Lawrence) and Mike Lowrey (Smith) proved to be a genuinely dynamic duo. The two comics demonstrated an impeccable ability to each switch from straight man to punch live administrator.

Bad Boys II finds them just as kinetic together but Lawrence has defaulted to being most frequently the victim of bigger star Smith's good intentions. The body of the outlandish comic sets in the film come at the expense of Lawrence's character, and he demonstrates himself to be more than up to the task. Almost all of the positives I took from my screening centered around him. While he is used to unneeded extremes at certain points, Lawrence is definitely the best part of the movie.

Smith, for his part, continues to do what he has done for all too long now. He coasts. In his defense, the sketchy character development given to him by the team of scribes responsible for the screenplay offers little opportunity for him to be anything else. It's enough to make me wonder if there isn't scribbling in the margins that says, "Have Will be the Fresh Prince here." He is a talented thespian and he deserves better, even from a paycheck part.

The story in Bad Boys II is something of an oddity. There are hints of very clever ideas which tantalize but a lack of cohesion causes a feeling of incompletion. For such an overly long film (roughly two hours and 20 minutes), that's sloppy.

The underdeveloped portion of the story involves the unexpected visit of Marcus's sister, Syd (Gabrielle Union, the goddess of love). She claims to be there on vacation and lets Mike know he is the preferred resort spot this season. Mike doesn't want to turn down this serendipitous offer from his secret lover but to make that work, he will have to keep Marcus from finding out sweet sister Syd is ronking his best friend Mike. What odds do you think Vegas would give on that happening for the whole film? And sunny point number two is that Syd's alleged vacation involves some of the most violent crime lords Cuba has ever birthed.

The uber-national aspect of the above is a large reason for the discomfort caused by a Bad Boys II viewing. While it's not at all unexpected to find a Jerry Bruckheimer/Michael Bay production to be fiercely patriotic, the casual disregard given to anyone Cuban is sick and pathetic.

The overtones are there throughout the movie, and it proceeds from implicitly verbalized to explicitly demonstrated during an unwarranted final showdown. There is a moment two hours into the proceedings where it appears the movie is done and we can go home. Right at this second, about a dozen guys decide to invade Cuba. Had that not happened, I would be unabashedly stating my enjoyment of Bad Boys II despite a couple of unwelcome scenes involving corpses. Since they do head south, the movie is hard to forgive.

The problem is that while in a foreign country, Mike and Marcus go on a spree of violence that Joseph Stalin would admire for its malevolence. At one point, they jump in a Humvee and start mowing down inhabited shanties just because they're there. Why is this allegedly okay? A quick line is added that this is where the drugs are made; ergo, all of the people hanging out in these shacks deserve to receive Death by RV. I consider it to be the low point of cinema in 2003. And I have seen Kangaroo Jack.

For those who can get past the senseless slaughter of an indigenous culture (shout out to all the 14-29 male demographic reading BOP today), Bad Boys II is not a bad film. There are multiple belly laughs and a few fascinating stunt sequences. Had there simply been a touch more moderation, I would be calling this one a winner. As is, I have to describe it as a near miss. Michael Bay really does bring it on himself.