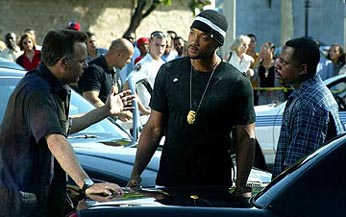 To paint a little thing like that you smeared
Carelessly passing, with your robes afloat,--
Yet do much less, so much less, Someone says
(I know his name, no matter)--so much less!
Well, less is more...

Let no one ever accuse director Michael Bay of being a disciple of either Browning or the artist about whom this poem was written.á No fan of subtlety, Bay uses Bad Boys II as an exercise in excess and a thumb of the nose to anyone who believes that action films should be tight, gripping, and thrilling.

Yes, Bad Boys II is an interminably long and at times excruciatingly dull film, but the hell of it is that it does have flashes of brilliance.á The interplay between co-stars Will Smith and Martin Lawrence is frequently inspired, and one of the featured action scenes is among the best car chases ever captured on film.á Unfortunately, the best sequences come very early in the film, leaving the viewer stuck with a bloated mess that would be an excellent cure for any insomniac.

Itĺs a damned shame, too, because if Bay had any willingness whatsoever to leave some pieces of film on the cutting room floor, the movie could have been a great summer popcorn flick.á The intertwining plots that bring Mike and Marcusĺ personal lives in contact with their jobs as cops work very well and the dialogue is both witty and engaging. Gabrielle Union is quite winning in her limited supporting role, and the villain (Jordi MollÓ) is menacing yet quirky.

The problem is that Bad Boys II just goes too farůover and over and over again. This issue first becomes apparent when Joe Pantoliano appears onscreen for the first time as Captain Howard. I generally like Pantoliano a lot ľ partly for sentimental reasons because he was in The Goonies, but also because heĺs had some strong performances in the past few years, including Bound, The Matrix and Memento. In Bad Boys II, though, heĺs just yelling his way through the role; that is, when heĺs not interrupting the screaming with ridiculous, psychotherapy-inspired, self-calming techniques.

Since Pantoliano doesnĺt have that much screen time, the histrionics could be easy to overlook, but in combination with numerous other over-the-top sequences, his performance is just another piece in a very ill-conceived puzzle.

Things actually get much, much worse when it is revealed that the bad guy is the owner of a funeral home. Bay comes up with new and unimaginable ways to defile corpses, using them to forward the plot as well as building action and tension. Itĺs a disgusting display that is very difficult to watch; the whole affair just feels so disrespectful.

That uncomfortable feeling carries over to a scene where Lawrenceĺs character accidentally ingests ecstasy. Itĺs intended to be played to full comic effect, but it mirrors some of the actorĺs past real-life troubles so closely that the behavior seems too real. Itĺs embarrassing to the point that it pushes the envelope of good taste.

Making matters worse is the fact that the film just neverůseemsůas thoughůitĺs goingůto end. Good sequences give way to long, drawn out attempts at resolving various pieces of the plot, but then the movie inexplicably keeps going. In retrospect, itĺs no wonder that Pantolianoĺs character is screaming all the time. I wanted to do the same. If only the movie hadnĺt been so loud, maybe I could have napped a bit.

And boy, is Bad Boys II ever loud. Charlieĺs Angels: Full Throttle still beats BBII as far as noise level, but be prepared nonetheless for a non-stop barrage of explosions, rap music, gunfire and Pantoliano-screaming to pierce your eardrums.

Along with the clamorous soundtrack are Bayĺs trademark editing cuts that move so quickly, your head will spin. One scene in particular (when the boys bust into a house full of Haitian gang members) is dizzying in its constant movement. Much of this effect is surely intentional, but rather than being effective at whatever emotion Bay is trying to evoke, itĺs overtly noticeable and takes the viewer straight out of the movie.

Despite my general displeasure with the overall product, the movie actually does seem to be quite a crowd pleaser, and for pretty good reason. The aforementioned car chase scene is extremely adrenaline-pumping and well worth the price of admission. Also, Bad Boys II has plenty of genuinely funny moments, and I frequently found myself laughing at the goofy banter that flows from the two stars. There are even a couple of great cameos, though Dan Marinoĺs has been pretty well played out in television commercials. Former NBA star John Salley is also onboard as one of Marcus and Mikeĺs colleagues, and he has a terrific deadpan delivery that made me chuckle.

Itĺs just not enough to save Bad Boys II, though. All of the best bits occur in the first half (or maybe even the first third) of the film, leaving the remainder as a monotonous attempt to reach the final, climactic moment. And then, the movie just ends abruptly, which left me a bit empty even though I couldnĺt wait to get out the door. Still, itĺs by no means the worst movie of the summer; itĺs simply too overblown to fully recommend.