It Came from the Basement:
Storm Boy 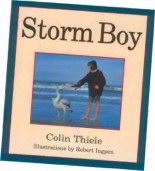 Storm Boy (1976 AUS)
Embassy Home Entertainment 9008
The story: Mike, a ten-year old boy, lives with his father on a remote and rugged stretch of Australian coast land. When poachers kill a mother pelican Mike adopts her three orphaned chicks. As the outside world threatens to intrude, the complications for Mike, his father, and the pelicans increase.

The film: Storm Boy is in many respects the Antipodean antecedent of 1996’s Fly Away Home(USA), another film about a youngster adopting abandoned birds. Whilst that film remains a firm rental favorite for American family viewers, Storm Boy is completely unknown in the United States. That’s a shame, because it’s the superior film, blending a story that provides perfect family entertainment values with impressive technical work and solid artistic qualities, beginning with Sonia Borg’s fine screen adaptation of a Colin Thiele novel.

Mike and his father, Hide-Away Tom, are a self sufficient pair roughing it alone in an aluminum shack in Southern Australia, fishing for a living and keeping an eye on the local nature preserve. Mike stumbles across a wandering aborigine, Fingerbone, who is residing illegally on the preserve after being expelled from his tribe for some personal indiscretions. When hunters shoot an adult pelican, Fingerbone wins Mike’s confidence by showing him the now motherless chicks. Tom reluctantly allows Mike to keep and raise the birds, who rapidly come to see him as a surrogate parent.

This idyllic existence doesn’t last long, of course, as the local primary school teacher tries to convince Tom to enroll Mike in classes. Tom, who has separated from his wife, thrown up his petrol station job and has no time for civilization in general and consumer society in particular, tells her his son is learning everything he needs to know with him. When Mike asks his Dad why they can’t live somewhere less remote, Tom tells him they live in “the best place there is”. Unfortunately, local hell raisers in dune buggies promptly arrive on the scene and damage the family shack. Fingerbone gets into trouble with the law for firing a gun at the buggy drivers and Mike learns that his parents split up, though his father has always told him that his mother was dead. (She is, but her death came after the divorce.)

In the meantime, Tom has forced Mike to free the three now fully-grown pelicans, named by the young boy Mr. Proud, Mr. Ponder, and Mr. Percival. Mr. Percival won’t leave, however, and returns to Mike. The two raft about on the open waters, play catch (you really need to see a pelican play catch), and ultimately help rescue a foundering boat of pleasure cruisers during a nasty storm. Typical of films that pair up children with animals (Ring of Bright Water, etc.), the film ends on a bittersweet though certainly not unhappy note.

There’s plenty here for older children to enjoy, but there’s adult fodder as well. Hide-Away Tom and Fingerbone, both initially suspicious of each other, eventually recognize their mutual rejection of (and by) mainstream society and become firm friends. There are plenty of hints at the iniquities of civilization, represented both by the gross misbehavior of the buggy drivers and the carelessness of Goolwa fishermen, seen blithely tossing empty beer cans into the harbor. Fingerbone’s character also provides some interesting glimpses of Aboriginal culture and mythology, as he tells Mike of a creation story involving pelicans and warns “you kill pelican, the sky come up with storm.”

The cast and crew: Mike is played winningly by Greg Rowe, a 13-year-old Aussie lad who had a brief film career, including a small role in Peter Weir’s mythopoetic The Last Wave (1978 AUS). Weir must have been impressed with Storm Boy, because he also cast David Gulpilil (here billed simply as “Gulpilil”) as Chris in the same film. Gulpilil was seen most recently as the tracker in Philip Noyce’s masterful Rabbit-Proof Fence, and it’s a great pleasure to see him here in a talking role playing a more light-hearted character. The top acting kudos, however, go to Peter Cummins as Greg’s father, a loving but clearly conflicted character who isn’t really sure what’s best for his boy. Cummins is equal parts curmudgeon and caretaker, raising his son in an unforgiving but physically gorgeous setting. Cummins was active throughout the ‘70s and ‘80s but doesn’t have any recent screen credits - perhaps he’s treading the boards somewhere in Australia as you read this.

If Cummins is the film’s acting star, the technical star has to be cinematographer Geoff Burton, who captures some absolutely stunning vistas in the region of Goolwa, a small town on the Fleurieu Peninsula near Adelaide in the State of South Australia. Most of Burton’s work will not be familiar to American audiences, though he did shoot the memorable opening sequence in Philip Noyce’s excellent neo-noir, Dead Calm, the film that introduced Sam Neill and Nicole Kidman to the outside world. Also of note is the elegiac and mournful score by Michael Carlos, another forgotten hero of the Australian film renaissance of the period.

Nostalgia value: This is a film that plays as well today as it did in 1977. It’s thoroughly timeless stuff. So no, there’s nothing remotely retro, camp, or cheesy about it.

The print: For a film last released on video in America in 1985, it looks quite good. There are occasional cropping and pan and scan problems, but nothing major. Colors are bright, looking especially vivid during sunsets and beach scenes.

DVD prognosis: Storm Boy is available on DVD in Australia, but I don’t have access to a copy. Online catalogues suggest it’s a budget-minded release, with no indication of extra features or letter-boxing. It’s been out of print for almost twenty years in the United States, however, and is definitely worthy of a quality reissue. The film looks beautiful on my aged videotape, so I can only imagine what a proper restoration would look like. I have no idea who may own the American rights, but somebody should get busy and find out. It wouldn’t be stretching things to see this added to the Criterion Collection.

Ratings: Film: A. Storm Boy is an intelligent family film that doesn’t pander or preach, is beautifully written and produced, and has a sterling cast.

Print: B+. Whoever was mastering things at Embassy Home Entertainment recognized they had something good on their hands.

DVD worthiness: A. In an age when overrated kiddie fluff like Harry Potter and the Chamber of Secrets gets the lavish two disc treatment, a nice restoration of Storm Boy in widescreen with an accompanying commentary would restore the karmic balance.