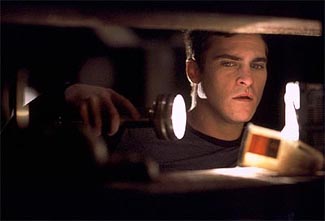 M. Night Shyamalan has directed all of four studio releases to date, yet he is already one of the most recognizable artists in the field. His latest creation, Signs, is an attempt to explore somewhat more complex themes than in his last film, Unbreakable, while still excelling in the realm of storytelling. For the most part, he undeniably succeeds.

Signs attempts to address the issues of faith versus luck through the usage of Father Graham Hess (Mel Gibson), a reverend who has lost his belief in a higher power after the senselessly tragic death of his wife, Colleen. Throughout the piece, he struggles with the dual losses he feels from her absence and the disappearance of his faith as he tries to raise two young children. Helping him in this task is his recently-returned brother, Merrill, a minor-league baseball player of some reputation who has quit and come home to take care of his emotionally-damaged sibling.

Together, the close-knit family unit of four find themselves faced with enough of a struggle before being confronted by the possibility of a much larger mystery. As the film starts, Graham and Merrill find the boy and girl, Morgan and Bo, behaving in a peculiar fashion. Events quickly reveal that crop circles have been created in their corn fields, and it falls to Hess to discover why all of this is happening to him and his.

To discuss the film's plot details further would risk revealing at least a portion of the mystery and thereby cheapen the viewing experience, so we will go no further in this regard. Suffice it to say that what M. Night has historically done well is somehow even better here. The first viewing of Signs proves to be an audience-gripping series of events which unfold at a magnificently controlled pace. Each instance of drama in the early stages of the film is quickly followed by unexpectedly enjoyable comic relief and then character development. What's most impressive about this portion of the production is how well it sets the table for the climactic events of the movie while still engaging viewers. I haven't experienced such palpable audience tension at a film in quite some time.

While Signs does offer a very satisfying audience experience, it is far from perfect. Unlike his previous films, The Sixth Sense and Unbreakable, Shyamalan does not wait until the very end for the Big Reveal. Instead, we learn relatively early what the truth is. From then on, the attempts to continue to build tension feel quite forced, and some of the behavior by the central players is highly questionable. Oddly, this does not apply to the end sequence, however. The climactic ten minutes is simultaneously surprising, intelligent, and wildly entertaining. It is at this point that we appreciate several previous arcs in the story as they are tied together tightly with a nice, big bow on top. The disappointment with the previous 20 minutes is washed away in a baptism of cleverness.

What most impresses me about Signs is that the story we discover it to be is neither original nor unique. In the hands of lesser talents, that's the way I would start a negative review of a film. With M. Night, however, I say this with a hint of awe in my voice. He has the confidence as an artist to recognize that a great story is a great story, and one that he can tell in his voice in a manner which will still delight audiences. He proceeds to do exactly this by showing a fascinating, flawed hero attempt to regain his lost faith in troubling times. There are certainly plot holes which could be picked apart, and the film is almost certain to lose some of its gloss with additional viewings but on the whole, Signs offers one of the finest displays of tensely epic storytelling we've seen in years.

If Alfred Hitchcock would have made a film in 2002, it would be Signs.