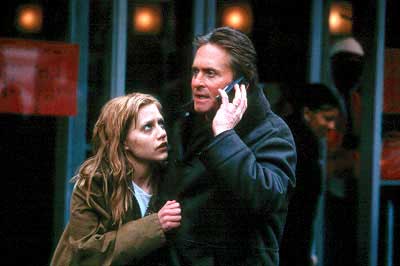 Michael Douglas has had an interesting run of acting performances in the last year-and-a-half, starting with the two abortive releases of Wonder Boys and highlighted by the mega-hit and multi-award-winning Traffic. I was in the silent minority of people who found the former work vastly superior to the latter, but since both made my top ten of 2000, the obvious inference is that I'm a fan of the actor and his ability to choose quality scripts. Thus, it's not particularly shocking to acknowledge that I've been looking forward to Don't Say a Word for quite some time. As luck would have it, I was not disappointed.

Based on the Edgar Award-winning novel of the same title, this motion picture tells the story of Nathan Conrad, a successful psychiatrist and family man whose life is turned upside-down when he is randomly selected by robbers to be the doctor who can unlock a mystery based mainly in the head of a mental patient.

Don't Say a Word begins by setting the table for later circumstances by showing the heist in 1991. Made apparent immediately is that these are competent, level-headed professionals who are not to be trifled with. The criminals are helmed by Patrick Koster (Sean Bean of Goldeneye fame), who capably leads them to acquire a gem worth some $10 million. The only flaw with his plan is that there is no honor among thieves, so a surprising betrayal leaves the squad split and Koster and his companions still searching for the jewel a decade later. This leads to the need for Conrad and his ability to unlock the mysteries of the mind.

Since the thieves realize that no good human being would willingly help them, a plot is set in motion to kidnap Jessie Conrad, the doctor's beloved daughter. Just to make the villains a touch more heinous, these events occur the day before Thanksgiving, and cause the sweet little cherub to miss the annual parade she is giddy to watch. I choose to forgive this overly-manipulative, transparent plot device, as it does lead to a very touching shot of a Bart Simpson float later on in the film.

Adding an element of intrigue to the story is that the kidnapping occurs while the parents are home and leads to a gripping scene of tension where Nathan originally fears his daughter might have fallen off the balcony, then realizes the chain on the front door has been severed. He returns to inform Aggie, his wife (the mesmerizing Famke Janssen, also of Goldeneye fame), of their misfortune. As he picks up the phone to notify the police of their plight, he is shocked to discover his daughter's kidnapper on the other side of the connection. Koster proceeds to tell him "The Rules" of their union, and is emphatic that he holds the cards if the loving parents want to see their child returned. Further adding to the feeling of impotence on Aggie's side is that she is given the Rear Window treatment. Her broken leg prevents her from jointly working with her husband to find the six-digit number which will save their daughter's life. Instead, Aggie is stuck in an apartment she knows is bugged with cameras, so she is uncomfortably aware that she is under the microscope throughout the day while Nathan alone carries the burden of saving their child.

This is a gripping idea for a story, and it carries the first half of the film through marvelous pacing. When the good doctor finally meets his patient, Elisabeth Burrows, the tension is palpable without being forced, as the clock ticks down on his deadline. Played by Brittany Murphy, who is impossible to miss in the fall of 2001 with her roles in four different releases, the character of Elisabeth is her tour de force. She is given the opportunity to steal scenes with her jittery yet forceful presence as a small child whose mind has been locked at one moment in time for the past eight years, and who is completely unable to participate in the world or interact with the people dwelling in it. When Elisabeth is first shown, she is bruised and battered, but we learn that she is merely mimicking the actions of other schizophrenics to shield herself from the prying minds of doctors who might want to focus on the events she so desperately needs to escape. If you have seen the trailers for the film, you have been given an accurate representation of her performance as she deftly portrays a woman who is simultaneously girlish and wise beyond her tender years. She is simply a revelation in this part.

As the mystery unravels, Don't Say a Word does have a couple of bumps along the way. Of note is the character of Detective Sandra Cassidy (Jennifer Esposito), who is tracking two seemingly unrelated murders where the victims were killed in a similar fashion. The story clumsily ties in these events with the woes of Dr. Jerald Sachs, a counterpart of Dr. Conrad, who is obviously hiding something from the first frame. Connecting the dots in this portion of the story is so easy that I felt like it came from a different film. The fact that it added nothing to the main story made me frustrated that there was not a better attempt at cohesively combining the pieces together. Also, the climactic sequence is derivative, over-the-top and predictable. This is particularly disappointing after the nice build to the finale, but the actual solution to the mystery is good enough to nullify this gripe. If not for these minor annoyances, the movie would be a strong contender for a spot on my top ten list for 2001.

As it stands, Sean Bean's wonderful ability to portray a menacing villain and Michael Douglas' well-documented skill at playing Everyman-type roles leads to fantastic interaction between them throughout the film. When the character of Elisabeth is added to the mix and we begin to discover the events which caused her to shut down from the outside world, the story is equally believable and enjoyable. Once the movie brings Jessie and Elisabeth together, the sisterly bond they instantly share is subtle and moving. With this many wonderful relationships explored without being immediately dismissed (the cardinal sin of current Hollywood trending), it's impossible to dislike the movie. Don't Say a Word isn't perfect by any stretch, but it is one of the best mystery thrillers to come down the pike in a while, and blows generic junk like Along Came a Spider and Angel Eyes out of the water. Highly recommended.