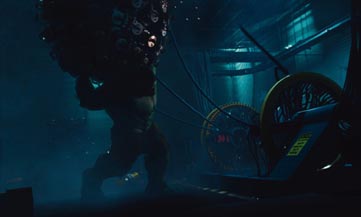 My name is Dr. Bruce Banner and me and my alter-ego’s green destiny is to suck. No, that’s not even right. The Hulk doesn’t even suck, but rather it disappoints on every level in a way that isn’t even interesting enough to arouse passionate rants. Instead, it’s representative of the current Hollywood mentality that everything is better with CGI, the very same thought process which is currently causing a lot of movie directors to fall on their swords this summer. Ang Lee, the auteur of Crouching Tiger, Hidden Dragon, is simply the latest version of this year’s model.

How bad is the CGI in The Hulk? There is simply no way you can brace for its awfulness no matter how prepared you might feel yourself to be. When the not-so-jolly green giant first unleashes his fury, you might be inclined to give the benefit of the doubt but that will prove to be a mistake. The first display of animated menace is sadly about as good as it gets and from there, the movie’s special effects depreciate from bad to comically inept (no pun intended).

The lone success stems from the rare moment when The Hulk is given tender moments with Dr. Betty Ross (Jennifer Connelly). Sad must be easier to animate because the monster looks like a giant teddy bear during these brief sequences, but when he’s on the rampage, the cardinal movie sin is committed. The viewer is made aware of the fact that what they are watching is not real, and this unfortunate distraction takes you out of the movie. While in Crouching Tiger, Lee proved successful in enrapturing viewers so that they were too spellbound to notice the physical impossibility of actions being demonstrated on screen, The Hulk is the core opposite. It’s all too obvious how artificial the surroundings are, making it impossible for a person to become engrossed in the storyline.

Of course, this might not have been unintentional, because the plot itself is rather lacking. It’s easy to see why a director with the talent of Ang Lee would be drawn to such a Shakespearean tale of doomed lovers and intersecting family histories. The drama begins in the previous generation as mad-scientist-in-training David Banner is ordered by superior officer Thunderbolt Ross to stop performing his research before it goes into dangerous areas that the government will not condone. Banner eschews his orders and instead subjects himself to genetic experimentation. He finds no positive results, and when his test data is discovered, Ross fires him and makes Banner face a court martial followed by three decades of imprisonment.

During the process of this fall from grace, David discovers that his son has shown unexpected results and accidentally become a guinea pig for his father’s forcibly abandoned but not forgotten research. Bruce’s lurking DNA surprise bubbles under the surface while he grows up as Bruce Krensler, an adopted child with only suppressed memories of his tortured boyhood, who eventually follows in his father’s footsteps as a scientist. In a strange twist of fate, he has fallen in love with Betty, who turns out to be the daughter of his father’s incarcerator. It’s the makings of a great story, as the popularity of both the comic book and the 1970s TV show would attest. Unfortunately, the movie is much less than the potential sum of its various parts.

One of the central failings of The Hulk is that neither octogenarian character, David Banner or General Ross, is fleshed out. The effort is certainly made at certain points but each man’s actions seem inconsistent for the most part. Both profess love for their children and a drive to ensure their well-being. Their incongruous actions make the dialogue ring hollow, though. There are certainly moments of poignancy such as when David Banner, now masquerading as a janitor in order to be near his son’s research, first encounters the green beast who dwells within his boy. These are counter-balanced by instances such as when the elder Banner sends mutant dogs out to kill the love of Bruce’s life. Conflict is added with little thought about the how or why of its occurrence. It’s possible that there are explanations in existence which were left on the cutting room floor but the movie in its current state offers up two deeply flawed characters, both of whom appear to be recent graduates of the Nic Cage School for Overacting.

Jennifer Connelly appears miscast here. She has no chemistry with either Eric Bana as Banner nor Sam Elliott as her father. Her sole purpose in the movie appears to be looking stunning, which is something she may always carry off. It’s never readily apparent why she loves Bruce or why she’s willing to put up with all the horrors inflicted upon her when she pursues the redemption of the green monster within him. Sadly, their relationship is much better than the one she has with Daddy Thunderbolt. Their shared scenes are nothing short of excruciating.

For his part, Bana simply doesn’t have the oomph needed for this role. While the scenes in which he hulks out demonstrate some excellent facial acting, an under-appreciated and difficult accomplishment for thespians, it’s when he plays Bruce the man where he lacks charisma. He is overshadowed in the scenes he shares with his father, the screamer, and he’s too mechanical in his interactions with Glenn Talbot (Josh Lucas), the man aims to use Bruce’s research for his financial gains. Combining that with his incompatibility with Connelly, he comes across as the wrong man for this job. But at least when he’s on screen, it’s a few moments where the animation is not going awry, so call it a win.

The Hulk is a movie that has everything going for it on paper. The cast, the story and the director all scream for a marvelous production. In execution, though, this film fails to accomplish anything noteworthy. A strong candidate for my worst of 2003 list, it’s a disappointing misfire and a very frustrating cinematic experience.