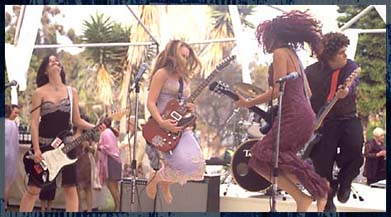 Freaky Friday delivers exactly what it promises. Whether or not that's enough for you largely depends on whether or not you have tender recollections of the Disney classic. That 1976 classic started a trend of body swap films that continued throughout the past quarter century. The popularity of the concept is largely an extension of fondness for the original piece (which was itself a play upon the concept of the 1948 Peter Ustinov flick, Vice Versa), and frankly a comedy genre that is difficult to do poorly. As you have probably already determined, I am largely satisfied with the re-make of Freaky Friday.

The movie involves a mother and daughter who are suffering from a severe case of Generation Gap-itis. Mommy dearest, Tess Coleman (Jamie Lee Curtis with a shamelessly frumpy look), is a successful psychiatrist trying to finalize the details of her weekend wedding. Her boyfriend, Ryan (Summer School living legend Mark Harmon), is impossibly virtuous and more than a little bit of a dreamboat, so it’s important everything go just so. In the meantime, daughter Anna (Lindsay Lohan, also the star of The Parent Trap remake in 1998) is struggling with the day-to-day issues of teen living. She has a bratty brother who makes her life hell, her rock band can’t ever get a gig, and motorbike riding Lone Ranger Jake (Chad Murray) doesn’t seem to know she exists.

The two women are a lot alike, but they’re so busy running the rat race that neither one ever takes time to notice it. If only some quasi-mystical “Asian voodoo” were to occur, maybe these women would realize how much they have in common. Boom! Two fortune cookies and some painfully xenophobic dialogue later, a body switch occurs, leaving Tess in a very perky body consumed with raging teen hormones, while Anna finds herself in a body three decades too old to only have a learner’s permit.

The set-up leading to the out of body experience is far too tedious and protracted, but once the Coleman Girls finally get to the fireworks factory, the movie kicks into a higher gear of whimsical pleasure. The unexpected causality is that neither Jamie Lee Curtis nor Lindsay Lohan seems to have the same aplomb in portraying their same-age character as they do in acting their faux-age.

Lohan in particular is profoundly impressive when she sinks her teeth into the maternal role. As a teenager, she is rather generic in the forcibly awkward teen segments where Anna interacts with the other kids her age. When the dynamic is altered, though, it is much easier to appreciate why Disney is so enchanted with this young actress. Her ability to broadcast maturity from every pore encompasses the viewer to the point that it’s easy to forget she is in fact a 17-year-old rather than a middle-aged mother of two.

As for Jamie Lee Curtis, many would argue that her career is representative of a poster child for arrested development, so her casting here is something of a masterstroke. She proves more than up to the challenge, though most of the humor she is given is broader, and therefore a bit too over the top for my tastes. As a put upon mother trying to juggle a career, a fiancé and two mercurial children, little opportunity exists for humor, and when she becomes Anna after the body snatching, the comedic elements take a sharp turn for the sophomoric. The extreme indicator of this fact rests in the way that the best Curtis segments as Anna involve her interaction with Jake, who at the tender age of 17 is already as impossibly virtuous as Ryan. This is in stark contrast to the lack of chemistry she possesses with Mark Harmon, who appears to be there for no other purpose than the fact that he is aging beautifully and could still pass for 35 even when given the dignified elder look (congratulations, Pam Dawber!).

What Freaky Friday does very well is play upon the jokes intrinsic to an out of body/into another body experience. With two leads who have a strong instinct for understanding how the other half lives, all that is required is putting them in awkward places where being the wrong person would be a problem. That means engagement parties, rock concerts and psychiatric sessions are all ripe for humorous moments.

Conversely, Freak Friday fails when it tries to do too much. It does nothing for me to see Anna “act her age” by lashing out at an overprotective mother during a therapy session. I’m equally unamused to witness Tess discovering that her son, the little boy she considered an angel, does in fact pick on his big sister when Mommy isn’t looking. These are classic Disney moments, of course, but I guess I’ve outgrown them or lost my youthful sense of humor somewhere down the line. The broad comedy bits come across as the worst sort of SNL bits rather than perfectly toned satire. These scenes play out in a manner I’d expect from something less polished like The Amanda Show but not in a major motion picture.

Freaky Friday is by no means a perfect film but of course, that’s not the point. It is instead an exercise in creating a timeless classic to stand for another quarter century in place of the original. Warts and all, Disney has accomplished this goal in spades, as Freaky Friday is one of the best received films in recent memory. Our audience was rollicking during all of the raucous moments with women in particular totally locked in to the proceedings. More impressively, their enjoyment was age independent, leading me to believe that this is one of the most successful movies in recent memory at striking a chord with its target audience. While men might not be as excited by the film’s propositions, I still think Freaky Friday will be a movie they largely enjoy as well. As such, I whole-heartedly recommend the movie for one and all as a multi-generational sentimental family comedy.