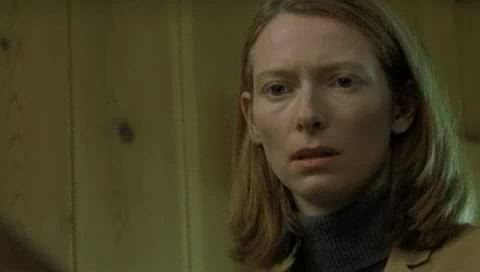 How far would you go to protect a loved one? That's the simple story idea that drives The Deep End, a taut drama featuring some of the most impressive character-study performances in recent memory. Chief among these roles is the tour de force acting of Tilda Swinton. Largely unknown in North America, her most recognized work to film lovers would be in Orlando, which won the British Academy Award for Best Motion Picture and received two Oscar nominations here. She has always hinted at being capable of even better performances, and with the arrival of The Deep End, that perception has become a reality. She plays Margaret Hall, a homemaker with three children who is forced to handle both parental roles due to the prolonged periods her husband spends at sea as a naval officer. She is doing the best she can in a situation that would appear idyllic to onlookers, but the deeper we dive into her day-to-day life, the more we discover the cracks beginning to show.

Living in a beautiful home by the water with her children and her father-in-law, she dutifully performs all of the tasks currently associated with a soccer mom. She sees the kids off to school with a hearty breakfast, takes care of her aging relative during the day, and then chauffeurs the children to all of their after-school activities. Rinse. Wash. Repeat.

It's not that Margaret's life is unrewarding per se, but there is a certain menial nature to it which leaves her feeling vaguely dissatisfied and unfulfilled. This frustration has become more complicated recently by the knowledge that her son Beau's awakening sexuality will be a likely source of discord in the near future. His father and grandfather are both gruff military men, and she fears his dawning recognition that he is homosexual will be problematic for all involved. It's not that she disapproves of his lifestyle but instead that she is driven by maternal instinct to protect him from pain. She knows that her husband and his father will not see the situation in quite the same light; furthermore, she knows that it will kill their dream of seeing him join the naval academy. The film starts with her taking steps to address the situation.

Mrs. Hall drives to nearby Reno, Nevada, to confront Darby Reese (played by Josh Lucas, last seen as the white-trash father in You Can Count on Me) about his relationship with Beau following a car wreck that left both men injured. Dirtbag that he is, Darby offers to stay out of the boy's life if Margaret will pay him $5,000. When she refuses and returns home, Darby decides to make a midnight visit to the boy's house. They go down to the boathouse to talk, their encounter turns from romantic to violent and Beau runs back home crying. As his ex tries to pursue, a concussion combined with a dilapidated wooden railing causes him to fall into the water and drown. When Margaret finds the corpse the next morning, she immediately assumes the worst of her son and in an instant, she determines to embark upon a course of action that will protect her boy from a lifetime in jail. She puts the body in her boat and takes it out to bury at sea. In the first ten minutes of the film, her entire future is altered in believable and intriguing fashion. The rest of the movie deals with the repercussions of her actions.

The lead character is left to carry the emotional baggage of her actions, but she doesn't have much time afterward to address it. This is because a blackmailer named Alek Spera (Goran Visnjic, AKA Luka from ER) shows up the following day to show her a tape involving a man who had owed his partner and him $5,000. Playing the video confirms her worst fears, as it is Darby having sex with Beau. Alek informs her that the police are going to create a lot of embarrassment for her family when they start asking about Beau's relationship with the deceased. He insists that she give him $50,000 by the next day if she wants to prevent this from happening. Unbeknownst to the blackmailer, his threat is much more dire to Margaret, since she thinks her son is the killer and fears police interrogation. She believes she has given de facto consent to the murder and this throws her previously tranquil life into turmoil, in the fallout of attempted cover-up.

As engaging as the moral implications of her duplicity are in what she assumes is her son's killing of another human being, The Deep End is equally entertaining when it demonstrates the difficulty of murdering a person without making mistakes the police could discover. Margaret is forced to lie several times and at each point, she shows that she isn't skilled in the art of deception and isn't clever in her attempts at covering up her involvement. In a story of this nature, there should be importance placed on the many pitfalls that await a murderer after the crime, and this movie gets a certain enjoyment from the main character's discomfort throughout. She's clearly in over her head and that point is made and made often rather than forgotten as soon as the crime is finished. Instead of showing her to be incompetent, her travails and her dogged determination to overcome them creates a strong sympathy for her plight. As much as anything else, Tilda Swinton's performance may be best defined in this fashion: we root for her every step of the way, despite the fact that we know the horrible thing she has done.

The events unfold in a manner that leads Alek, a gambler who desperately needs the blackmail money, to re-evaluate his actions. This is clearly not the first time he has plundered a person in order to feed his addiction, but the difference is in the person he's swindling. She's not another cutthroat mercenary in the murky underworld he usually frequents. Instead, she is a woman he discovers is decent and tirelessly dedicated to her family. As the conscience he thought he had lost forever starts to buzz in his head, he gains even more of an appreciation for the heinousness of his actions when he meets Beau. This is the boy whose life would be destroyed if the tape got out, and Alek is forced to see him for the first time as an ordinary teenager already struggling with much more of a burden than your average 17-year-old should ever face. He has just discovered his first gay lover tried to extort money from his mother. After they fought about that, his lover has tragically died, and now Beau is left to deal with the scarring ramifications while already struggling to handle all of the pressures of being a high-school student, such as going to swimming and band practices and trying to get into college. Beau is quite extraordinary in his emotional maturity, yet Alek can destroy the boy's future in one fell swoop. This realization alters the gambler's outlook on the life he is leading. The rest of the film masterfully explores his internal debate over his possibility for redemption and the depth of his feelings for Margaret. A hardened man with a shady past and a bleak outlook on life, he suddenly discovers a renewed desire to disavow himself of the actions he knows are wrong yet has been doing anyway.

While most motion pictures struggle to make even one character multi-dimensional and sympathetic, The Deep End does this with three different ones in Alek, Beau and Margaret. In fact, the mother and son have particular chemistry together, as we track the subtle intricacy of their relationship from the start to the very end. At first, we find Beau shy and frightened by recent events. He is reticent to discuss his life with his mother due to the awkwardness of the entire situation involving his relationship with Darby. When his lover dies, he feels a previously unknown pain that he isn't comfortable discussing with her, and it leaves him feeling even more confused and detached. Rather than push him on it, Margaret shows unusual wisdom for a parent and gives him privacy as he tries to find himself. She is torn between a mother's love for her son and the fear that he may have done something truly barbaric. This makes the frequent, uncomfortable silences between them believable and painful to watch. Later in the film, the son starts to wonder about his mother's relationship with Alek, the journeyman who keeps showing up at their house. This makes her the one with something to hide, and in this role reversal, it is revealed how similar mother is to son. Familial relationships haven't been explored this effectively since You Can Count on Me, and it makes for a wonderful character study.

While I did find the resolution of the movie too convenient and the last lines of dialogue entirely predictable, this in no way diminishes the journey leading up to it. The film is exactly the sort I love when done well. It takes a simple idea and tells a story quite effectively. Along the way, it reveals numerous layers to the main trio of characters, yet it never comes across as manipulative or forced in tone. This is powerhouse entertainment and a special treat for indie movie lovers who like to discover largely-unknown films. It also offers what I can only describe as the acting performance of 2001 to date, and if there is any justice, Tilda Swinton's work will be recognized with an Oscar nomination.