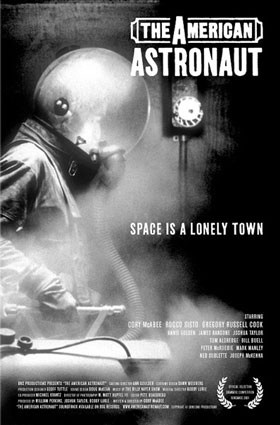 The American Astronaut does the impossible; this science fiction musical makes Moulin Rouge look like an ordinary, conventional movie by comparison. Principal photography is done in grainy black-and-white, using set designs so antiquated that I kept waiting for Rod Serling to appear at any moment to explain the events occurring before my very eyes. Honestly, the average moviegoer is going to want Serling there, because this film is unlike anything else in recent memory. In fact, first-time director Cory McAbee takes a certain glee in the unexpected journey, with countless unpredictable moments beginning with dancing thugs forcing a man in a bathroom stall to be serenaded at 45 RPM. David Lynch in his most outlandish moments couldn't direct such a surreal musical performance, and it cleverly sets the tone for the rest of the flick.

It helps that McAbee is the lead in his own film, because I am unsure any other actor would have had the ability to accurately interpret his direction for what he wanted to accomplish in each scene here. Fortunately, he has a leading-man look; specifically, he looks like a greasier version of Hugh Jackman, which also means a more youthful version of James Caan. He offers the perfect gritty appearance for this low-budget trip through the cesspools of the galaxy. Our hero, Samuel Curtis, is the tough-guy type. We know this because the first time we see the character, he is shaving sans water or lotion, a trick that hasn't been witnessed on camera since Minnesota governor Jesse Ventura's turn in Predator some 15 years ago. Clearly, this is a man to be reckoned with. Or a future politician. Either way, he's terrifying.

Soon afterward, the villain is introduced and we discover a couple of tidbits about his personality. First, he's a mass murderer with a dirt fetish. Second, he manages to appear insane to such a degree that he makes the line, "Aren't you going to sing 'Happy Birthday' to me?" sound like a not-so-thinly veiled threat. Our anti-social miscreant, Professor Hess (Rocco Sisto), turns out to be in some way historically linked to Samuel Curtis, though the details of this are intentionally left sketchy in order to keep up the clear theme of the film: Plot Optional. What is spelled out emphatically is that isolationist Hess is lonely, bitter and in desperate need of a hug. He's a big, wounded teddy bear with a tendency to solve his problems through the magic of laser-blast technology, and he's scouring the galaxy to meet up with our hero again.

As events unfold, we are witness to countless unpredictable situations. Rather than discuss each specifically and spoil the surprise, I'll merely pique your curiosity by describing a few of my favorites. The film includes the worst trophy-winning dance performance in the history of the human race; stand-up comedy singularly unique in its atrociousness and indescribably frustrating in its length; a bathroom stall photograph; several intentionally-awful musical numbers; a 1984 homage involving the introduction of explicit sex into a repressed, phallocentric society; a dual-named cat with a trio of owners; and a Real, Live Girl.

If none of this makes you want to watch the film, you should probably just stay away for your own safety, but if you're still reading, a couple of characters deserve special mention. One is named The Boy Who Actually Saw a Woman's Breast. His catch phrase? "It was round and soft...now go back to work." His appearance is best described as Tony Curtis playing King Tut meets David Bowie circa Ziggy Stardust (though I realize Some Like It Hot would be more analogous), and there is intrinsic comedy value in watching him sing lyrics previously only attempted by Ebn-Ozn.

Another is an odious dullard space-boy with a feisty personality and an unnatural attachment to his pungent spacesuit. Due to circumstances he isn't intelligent enough to comprehend, his fate is the most pleasant of the players involved. The comedic payoff involving his character that closes out the story's arc is somewhat lacking, but the boy himself is pure, goofy fun. In addition, his introduction is cleverly foreshadowed by another humorous character, an elderly cowboy whose outfit makes him look as if he would be better suited for the profession of bug extermination rather than space exploration, but his sudden burst into song is one of the true highlights of the presentation. This musical juxtaposition of western folk accompaniment with science fiction physics and anatomy lyrical discussion is a masterstroke.

The flick is stubbornly unconventional and flaunts its uniqueness with pride every step of the way. People burst into song the way the alien bursts out of people's chests in "normal" sci-fi...and with equal damage done to the human condition. There are numerous glaring logic flaws, such as the knowledge that Jupiter has no women and Venus has no men and both species are wildly oversexed yet the two have never been able to figure out how to solve the problem, but that's again the directorial style coming to the forefront. McAbee appears to get as much enjoyment from frustrating his audience as he does from surprising them; moreover, random narration is inserted solely for the sheer shock value rather than to clear up the plot since there is no plot. The movie winks at its audience's discomfort every step of the way.

The American Astronaut is less a film and more a series of ideas photographed for mass consumption. Most of these unusual visuals are displayed and then recklessly dismissed with little further mention, to the point that it almost works as an anthology of vignettes with one recurring character in each. A few of these pieces work, and a few demonstrate some drug-induced haze of the director, particularly well displayed as he belts out "The Girl with the Vagina Made of Glass" with unconscionable ardor. He sings with zeal what should have been whispered in shame and then dismissed immediately rather than filmed. There's a fine line between camp and schlock. The movie joyously blurs the line and then crosses it again and again, and this style left me cringing multiple times.

You may try to brace yourself to be en garde against the proudly avant-garde nature of this piece all you want but nothing can truly prepare you for it. The critical assessments will break down to two lines of dialogue from the movie itself:

Stranger yet, both answers are equally correct. Such filmmaking is extraordinary even if it is a failure to most of its audience in terms of simple enjoyment, as I expect will be the case here. The American Astronaut is a glorious mess with a few tremendous high spots stuck between numerous extended scenes that make me glad for the fast-forward button. I'm left with the ambivalent realization that I can't truly recommend the film yet I encourage people to sit through it should the opportunity present itself. You likely won't see anything like it again, and that alone makes it worth watching at least once.