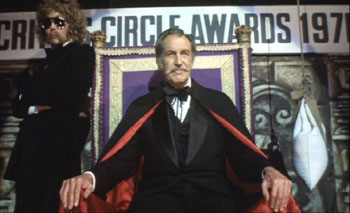 "Critics are like eunuchs in a harem; they know how it's done, they've seen it done every day, but they're unable to do it themselves."
Brendan Behan

As one might gather from the quotation above - one of many on this subject - critics are the bane of every artist's existence. Depending on the critic's stature, he can, to some extent, make or break a play, a film, a TV show or a career. And artists have no truly effective way of fighting back; they must suffer the slings and arrows of outrageous criticism with nary a defense, save continuing to ply their craft in hopes that the audience will ignore the critics and find their offerings pleasing. Probably an artist doesn't live who hasn't wished for a way to strike back, to take righteous vengeance on these scourges of creativity.

Theatre of Blood is a black comedy detailing one actor's revenge on a group of critics who go too far in pretending they understand more about an art form than the artists involved. To reveal too much of the plot might spoil the fun; suffice it to say that Edward Lionheart, the actor who has suffered once too often at the hands of heartless critics, exacts poetic revenge on his tormentors that is as wickedly funny as it is ingenious. Although the audience is in on what is happening and who is behind it far earlier than the characters in the film - in fact, for the sharp-eared, the "who" is never in doubt - watching the plan unfold, and the characters trying to determine how to stop it from proceeding to its seemingly inexorable conclusion, makes for as entertaining an hour-and-three-quarters as one can spend watching a film.

So why should modern audiences view the film?

Well, if you're an actor - or indeed, a practitioner of any of the performing arts - there's the joy of watching uppity critics get their just desserts. Seeing the smarmy bugs trying to backtrack on their cruelty in an effort to save their miserable hides provides a certain perverse pleasure to those in the audience who have also suffered the critic's lash.

Theatre of Blood is also a showcase for the talents of Vincent Price, who inhabits Lionheart with a grandeur and sly wit that is a joy to behold. And although there are certainly macabre overtones to the picture, Theater of Blood is a rare chance for audiences to see Price as more than just a horror-film star. Not only does Price as Lionheart appear in a variety of disguises as a multitude of characters, but he is given the opportunity to play portions of some of Shakespeare's plays in service of the plot. To hear that unmistakable voice proclaiming the Bard's majestic phrases is more than worth the price of admission.

And if you still need persuading, perhaps the opportunity to watch the lovely Mrs Emma Peel, AKA Diana Rigg, more than hold her own whilst aiding and abetting Price as Lionheart's devoted daughter, Edwina, will entice you. Rigg also gets the chance to portray more than one character and declaim the Bard's immortal words, with the same aplomb she displayed foiling secret agents and plots to take over England in The Avengers years before.

Finally, if the acting isn't enough, there's the ingenuity with which Edward Lionheart takes his revenge. You can't see every plot twist coming from miles away, even once you know the film's basic premise, and Lionheart's ability to adapt where necessary is just black-comedy genius.

Try and find the letterbox version if at all possible, but even if you have only the pan-and-scan available to you, treat yourself to the wicked delights of Theatre of Blood.