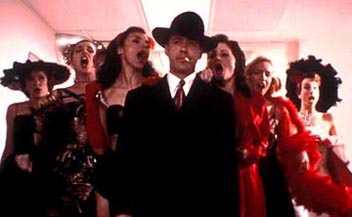 Due to the history of this project, there are two different groups that must be addressed: those who have viewed the original BBC series, and those who have not. Unfortunately, I can only give a heavily qualified recommendation to one of those groups - those already familiar with the plot.

The backstory has to be covered. In the mid-'80s, Dennis Potter, the irascible British author, wrote the screenplay for The Singing Detective, a six-part BBC television series. In the years since it first aired in 1986, it has grown in critical appreciation to the point where some folks - myself included - consider it to be the greatest made-for-TV work ever produced. Running nearly seven hours, the series weaves an extremely complex tale of chronic illness, the petty humiliations of hospital life, a fictional tale of intrigue and murder, contemporary martial problems and unresolved childhood traumas, all viewed through the lens of an increasingly fractured mind.

After the BBC series had aired, Potter decided to work on a film version of this sprawling story. He set himself the unenviable challenge of reducing his interwoven web of storylines down to a manageable script nearly 75% shorter in length. Potter died in 1994 with the film in turnaround; the project languished for nearly a decade. Finally, Mel Gibson came along and picked up the rights. He chose to make the film as a small-budget production, casting himself in a key role and getting director Keith Gordon (Waking the Dead, A Midnight Clear) on board.

Now, 17 years after the series first aired, we finally can see the results of this oft-delayed project on the big screen. Unfortunately, what we ultimately receive is an expected by-product of such a complicated history: a story with so much cut out that character motivation becomes fuzzy and plot elements are simply confusing.

We have to begin with the script. Potter decided, as part of this TV-to-film conversion, to change the setting of the story. For the childhood flashbacks, the BBC series was set in actual locations from Potter's childhood in the late '30s and early '40s. Potter moved the location to the U.S. (California), changed the name of the character (Philip Marlowe becomes Dan Dark) and changed the timeframe to the '50s. Because both the series and the film are so dependent on music from each era, this change presents problems, as it was easier for Potter to select music from his own childhood to produce the appropriate ironic comment on the plot. In the film, several musical selections seem remarkably arbitrary - in particular, the key first musical sequence at the hospital. In the series, this was the basis for the justly celebrated "Dry Bones" song-and-dance scene.

For the film, the selected song is "At The Hop." While it provides an up-tempo basis for a kinetic dance sequence, it lacks the organic connection to the hospital setting. Further, Gordon unfortunately mishandles the transition into this sequence, producing an awkward and stilted beginning. Since this represents the introduction for the audience into the fractured nature of Dark's mind, having this critical number fall flat is a near fatal moment.

This is not to say that all of the music selections are poorly chosen or mishandled. In particular, the "Mr. Sandman" sequence with Katie Holmes' Nurse Mills character works well, and the "turning point" scene with Gibson's Dr. Gibbon character quite effectively uses "Three Steps to Paradise."

The other major problem with Potter's script stems from the drastic cuts required to go from a nearly seven hour long series down to a sub-two hour movie. The cuts are particularly painful for those who know and love the BBC series: most of the hospital material, a good portion of the "book" sequences, and, most painfully, nearly all of the critical childhood material. The film cuts this last element down so much that the father character is reduced to not much more than a shadow, and the mother's final choice is effectively unexplained - only those familiar with the original series will understand.

What this leaves: all of the Dark-Gibbon interaction, nearly all of the Dark-Nicola material, some of the Nurse Mills material, and nearly all of the Two Hoods scenes. However, with the exception of the Gibbons scenes, the remaining material still has cuts or changes that effectively render character motivation meaningless. The last scene with Nicola at the apartment just doesn't make sense - except to those who know that a preceeding scene in the series explains it perfectly.

This is the most serious problem of the film. It's difficult to imagine how confusing all of this has to be to anyone going into the film without a working knowledge of the longer version. So much gets blown through so quickly, skimming over key elements, that I felt sorry for those in the theater experiencing this material for the first time. (It was easy to tell who had seen the series and who hadn't: those who had laughed at known items whose setups weren't explained well in the film, while those who hadn't left the theater saying things like, "Did you understand that?") The source material is an amazing story, and is worth experiencing. But I have a hard time recommending this as the way of discovering it.

The casting is strong, and the performances are uniformly appealing. Robert Downey, Jr. does remarkably good work as Dan Dark, and Gibson nearly disappears entirely into the Dr. Gibbons character. Katie Holmes does what she can with a cut-back version of Nurse Mills, and Jon Polito and Adrien Brody draw the biggest laughs as the hoods. The best piece of casting, though, is Robin Wright Penn as Nicola. She brings a strong, grounding presence to the entire film.

In summary: there are serious problems with this adaptation. The cuts required to get the material down to a standard-length movie are, in my estimation, far too serious. Yet there are still things to like in this film. The Dark-Gibbons interactions come through remarkably well, the interplay between Dark and Nicola still works, and the overall tone does manage to squeak through. I believe that those who know the original work will find enough left in this adaptation to still enjoy it. However, those for whom this would be their first exposure to the story - well, I just can't bring myself to recommend it. I strongly encourage you instead to seek out the recently released DVD set of the BBC series. But, if you know that you just can't bring yourself to sit through nearly seven hours of TV to digest one story (and that's a personal decision), then this film will at least allow you to sample Potter's brilliant concept.