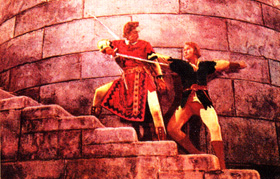 "Because, unlike some other Robin Hoods, I can speak with an English accent."

That shot by Cary Elwes in Robin Hood: Men in Tights was directed at Kevin Costner, who had employed an odd accent of indeterminate origin - when he remembered to use it at all - in Robin Hood: Prince of Thieves. A half-century earlier, Errol Flynn avoided the problem altogether by not using an accent, period.

And it worked beautifully.

The Adventures of Robin Hood is the kind of sweeping epic for which Hollywood was once famous. It has action, adventure, romance, a clear-cut villain, a manly hero, a fair and virtuous heroine, the good guys win in the end, and all in glorious Technicolor. In short, it's the perfect Golden Era-Hollywood film, and it helped solidify Flynn's reputation as a swashbuckling hero.

So what's of interest to your modern moviegoer?

One big reason is because it's lots of fun. The Adventures of Robin Hood is every bit as entertaining as Die Hard or Raiders or any one of a dozen other action/adventure popcorn flicks. There are sword fights and feats of derring-do, all those swashes being buckled, not to mention gorgeous costumes and opulent settings. The film is a marvelous illustration of what Hollywood once did best.

There's also the chance to see a Hollywood legend in action. Errol Flynn was a larger-than-life character, both on-screen and off. He worked hard and he played hard, and his carousing was legendary. But Adventures of Robin Hood demonstrates why Flynn is known to this day as much for his films as his off-screen life. He has an easy charm about him, and a masculinity that has less to do with machismo than with being completely comfortable in his own skin. Whether being bested by Little John, twitting the usurper King John, unknowingly berating his true sovereign for allowing England to fall into treasonous hands while he was off fighting in the Crusades, or showing Maid Marian the realities of life for the poor under King John whilst winning her heart, Flynn is obviously having a grand time, and providing one for the audience as well. Self-assured without swagger, handsome in a rugged way and employing an easy athleticism that most men would find hard to match, Errol Flynn is the quintessential man's man. After seeing him in this film, it's not difficult to understand why he became a screen icon.

And I can't let an opportunity pass without mentioning one of my all-time faves, Basil Rathbone. Rathbone's portrayal of Sir Guy of Gisbourne is nothing short of spectacular. The courtly charm that belies the scheming and treachery underneath is Rathbone's trademark, and it is on full display here. The scenes between Rathbone and Flynn are riveting, and watching Rathbone fence is a treat; the old boy really was quite the accomplished swordsman. Rathbone's portrayal of Sir Guy is something of a foreshadowing of his Holmes; both are decisive, curt, and highly intelligent. One can almost imagine finding Sir Guy hiding in somewhere in Sherlock's family tree.

So return with us to those thrilling days of yesterday, and watch brave Sir Robin vanquish the dastardly King John and his maleficent henchman Sir Guy, thus returning the rightful King Richard Lionheart to the English throne, and winning the hand of the fair Maid Marian. Be sure to bring plenty of popcorn.