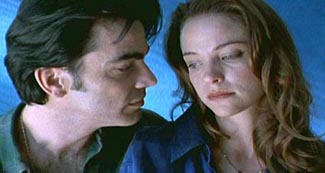 Steven Soderbergh delves full-fledged into noir with The Underneath, a remake of the Burt Lancaster film Criss Cross and based on the Don Tracy novel of the same title. Soderbergh does take certain liberties with the noir genre, specifically in the narrative structure as he chooses to tell the story in a non-linear fashion through a series of flashbacks and flash forwards. The end result is a somewhat cold and sterile film that shows a stylistic flare, yet lacks heart at its core.

The central story involves Michael Chambers (Peter Gallagher), who returns to town to celebrate his mother's new marriage years after he was run out because of gambling debts. He is determined to make things work this time, and his new stepfather gets him a job working as an armored car driver. As he re-assimilates, he settles on trying to win back his ex-wife, Rachel (Alison Elliot), only to discover that she is now engaged to a local hoodlum. His heart leads him into a predicament that forces him to concoct a scheme to arrange a heist of his armored car shipment.

In the meantime, we cut from the main story of Michael's return to town to flash back to the events that caused his initial exile and loss of his wife and flash forward to the heist. The result can be a little jarring, though different time periods are clearly delimited by specific clear-cut color palettes and filming styles. In this case, the jumping around in time is only somewhat successful. When we meet Michael, the simple explanation of his past is enough for us to get a pretty good idea about what went on, so the flashbacks don't particularly add to our knowledge.

The one aspect for which they do perhaps serve some use is to establish the relationship between Michael and Rachel. This relationship is certainly critical because it drives every decision that Michael makes, but even that is somewhat superfluous because Gallagher and Elliot have immediate chemistry that belies an earlier relationship. It is easy to believe Rachel as Michael's femme fatale without the explicit back-story. In some ways this added exposition is out of character for Soderbergh, who often likes to leave things more vague, though in other ways it fits into his penchant for non-linear storytelling.

Ultimately, though the romantic relationship is convincing, the strict adherence to the noir style makes The Underneath deliberate and aloof. It is technically and stylistically accomplished. It looks great and features some eye-catching scenes, particularly one that takes place in a hospital room, but it aggressively keeps the audience at an arms length.

The Underneath is perhaps Soderbergh's least successful film artistically. It's hard to put a finger on any specific elements as failures in the film, but it tends to lack an overall intensity, so it plays like the work of a talented, but detached filmmaker.