Review: King of the Hill 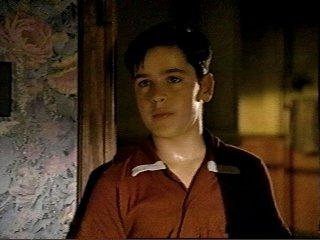 Based on the memoirs of author A.E. Hotchner, King of the Hill is a coming-of-age film set during the Great Depression in St. Louis, Missouri. Jesse Bradford plays Aaron Kurlander, a twelve-year-old boy whose family, like many others, has fallen on hard times. His father is out of work, and he is so single-minded about landing that big job that he inadvertently neglects the emotional needs of his family. The Kurlanders are living in a decrepit hotel that is one step away from a Hooverville, while the hotel's owner is simply waiting for tenants to default on rent so he can evict them to use their rooms as part of his makeshift bordello.

Aaron escapes through his imagination. He makes up stories about his family to tell the kids at school to hide the fact that he is the "poor kid" in the class, and excels in school. His situation isn't great to begin with, but then it gets worse. First, his younger brother is sent to live with relatives, then his mother is sent to a sanitarium, and finally his father must leave town to find work, eventually leaving Aaron to fend for himself. While that sounds thoroughly depressing, the tone of the film is surprisingly light. We see the film through Aaron's eyes, and though many of these events get him down momentarily, he also sees them as a big adventure.

Bradford is called on to carry the film, and he does so admirably. King of the Hill could have easily been a sappy film about a plucky kid overcoming hardship, but Bradford imbues Aaron with a perfect mix of innocence and maturity. Though events call for a certain amount of sympathy, he never allows it to devolve into pity. Aaron is irrepressible and he never comes across as a victim, as he is constantly taking an active role in his life while earning his independence and learning several hard facts about life.

Soderbergh films the period in bright colors, which further affects the mood, making it seem more like a hyper real fairy tale than a gloomy film about a downtrodden family. He succeeds in making the Great Depression look like a fun time to live. The villains also take on a certain mythical quality too, from the devious hotel bellhop to the big-bottomed police officer. The result is that Soderbergh creates a wonderland full of challenges for Aaron to navigate, and through his journeys our hero ascends to a new level of maturity. There is a still a slight bittersweet quality to the film, though, as on his way Aaron does experience and witness hardship and also suffers a loss of innocence. This is driven home in particular when he comes to the realization that he not only is no longer dependent on his father, but that he may also be a better provider than his father.

King of the Hill is truly a film to be treasured. It is the rare film that tells the story of children without descending into schmaltzy sentimentality. It honestly portrays the process of growing up, particularly in the midst of hard times, providing a profound character arc for its young lead. Full of deceptive simplicity, King of the Hill stands out as perhaps Soderbergh's best film and deserves to be held up with his more celebrated Cannes and Oscar winning films.