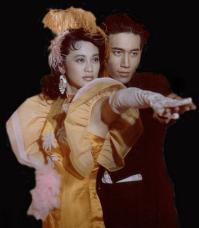 Famous Hong Kong film director Tsui Hark is best known for high-flying martial arts and action movies that explode across the screen in whirling bursts of color and frenetic excitement. Less celebrated, unfortunately, is the first movie that he both helmed and produced, the 1984 romantic comedy Shanghai Blues. Far superior to any Hollywood attempts at this genre in the last 20 years, this delicate, touching and often hilarious little film deserves to be known to a wider audience.

The movie opens in the Chinese port city of the title on the brink of Japan's invasion of China in 1937. A young man (played by Kenny Bee) is about to join the fight against his country's attackers, but as bombs fall during a Japanese air raid, he squires to safety a beautiful woman (Sylvia Chang) caught out by the enemy foray. Though during this brief chance encounter in darkness, there isn't time for them to introduce themselves or even to see each other clearly; there's enough of a connection for the pair to vow to meet under the same bridge in ten years, once the war has ended.

The plot then fast-forwards to a decade later as the soldier, now a musician, returns to the city. Plagued by the memory of the woman he encountered prior to the conflict, he continues constantly to dream of an eventual reunion with this enigma from the past. However, unbeknownst to the hapless fool, his mystery partner from years gone by has also come back to Shanghai, where she now works as a dancer in a local nightclub. With the kind of plot logic that typifies the classic Hollywood screwball comedy, the two end up renting apartments in the same building, with only one thin floor keeping them from meeting again.

Concurrently with all this, the dancer meets a perky-but-poor woman nicknamed Stool (Sally Yeh, who also appears in Hark's more renowned Peking Opera Blues) whom she takes in as a boarder. Against a musical backdrop, the relations of these three then get crazily complicated, as a series of random events leads the two women to fall for their upstairs neighbor, although they don't know of the other's affections. What brings things to a conclusion is that the dancer, Shu-Shu, eventually figures out that the man is the same one she met beneath the bridge before the war and via more screwball antics, the loose threads of the plot are wound together in a mutually satisfying finale.

The film obviously takes it cue from the style of comedy made popular by Hollywood during the 1930s; Shanghai Blues briskly moves along as the misfortunate characters are buffeted about by the capricious winds of a universe with a seemingly arch sense of humor. The initial half-hour is an especially snappy bit of filmmaking, breathtaking in the pace at which it introduces moviegoers to the people in the story and engages the audience in their on-screen lives. Also interesting is the use of music as an aid to the tale-telling, for while the film isn't really a musical in the standard sense of the term, there is extensive use of music as a directorial device. In Hark's capable hands, this seems to be more a natural outgrowth of the story than an artificial imposition, and there is one particular scene where Kenny Bee plays a serenade on his balcony as Shu-Shu listens from below that is as fine-spun a bit of heartfelt direction as you are likely to find anywhere in the Hong Kong cinema.

The entire enterprise is ultimately carried off by the liveliness of the principal actors and the skill of the man in charge of the venture. Awash in vibrant color, there's a breezy, optimistic romanticism that infuses the film, and while there might be some subtle winks at politics nestled in the screenplay, there's little that's cynical to be found amongst the fast-paced and amiable interplay. In any case, there seems to be something here that especially touches Tsui Hark's soul, as in all the myriad films this great director has been in charge of, there are few that exhibit the almost innocent depths of emotion on display throughout this wondrously charming bit of frothy amusement.

With so much of the director's catalogue available on either video or DVD in North America, it seems almost unbelievable that this luminous and endearing Asian tribute to the classic screwball comedy has not yet received a decent release on domestic shores. Fresh in its cheerful attitude and exhilarating in its execution, Shanghai Blues is a shining example of the exciting skill of its director, and though it features none of the violent fisticuffs that often characterize his work, it still utilizes the breakneck editing and breathless style that define the Hark touch. A continent of viewers exposed mostly to the tasteless blend of blasé rom-coms churned out by the Hollywood dream factory these days deserves better, and so we can only hope that some sharp distributor will find it in their hearts to bring this film forward for a Region 1 release. In a world of uncertain future and oft-times mediocre entertainments, a wonderfully simple pleasure such as this one should not be left a hidden gem forever.