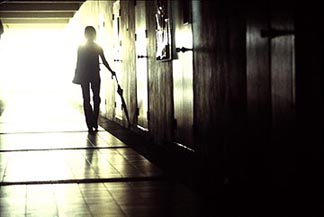 Isolation. Loneliness. Rejection. These are the things that all human beings fear most innately, yet they are the feelings rarely explored in the horror genre. Because of the extreme success of the slasher genre over the past 25 years, North American audiences have been treated to retread after retread of the same tired stories, just with new twists. The exceptions to this rule, like The Sixth Sense, The Others, and The Ring, are so rare that it really should come as no surprise that they strike a chord with audiences to break out as new suspense favorites.

Now comes an import from Thailand that handles the misery of disconnection and the desolation of solitude so effectively that it is very nearly heartbreaking even as it is spine-tingling. The Eye, written and directed by the Pang brothers, is an example of how horror can be done effectively and intelligently, not to mention being an absolutely gorgeous film to watch.

The premise of the film is rather ingenious. A woman who has been blind her entire life is afforded the opportunity to receive a cornea transplant that will enable her to see. After receiving the operation, Mun has no idea what vision even should “look like,” so when she starts seeing blurry images, she imagines that everything she sees is normal.

As her eyes grow stronger, though, she quickly realizes that some of the apparitions she is seeing are not quite natural. Worse, they’re actually quite terrifying, as Mun has the uncanny ability to witness death both before and after it happens. However, she doesn’t see the images in a Final Destination-style premonition. Instead, it’s much more subtle, with blurred figures and vague interactions with shadows.

The buildup to Mun’s realization that her new eyesight is both a blessing and a curse is nothing short of brilliantly handled. She is never quite sure what she is seeing, and when she describes her visions to others, they can’t confirm it for her, either. She’s not quite certain whether she is insane or simply condemned to be an instrument for those spirits who dwell on another plane.

In the process of making these discoveries, Mun becomes separated from her friends and their family as they simultaneously fear her and wonder if her mind has become somehow damaged during the course of the operation. The torture of loneliness is played out intensely, and combined with the constant impending sense of doom that affects Mun at every moment, is a horrific combination for the constitution to take.

Credit for imparting these emotions so intuitively must be given to lead actress Angelica Lee, a childishly beautiful young woman who delivers a gripping and heart-wrenching performance. From the film’s earliest moments when she is just opening her eyes to the world to an end sequence that is shocking in its extravagance, Lee’s ability to make the audience feel every emotion her character is experiencing is remarkable and quite frankly, an anomaly for films of this genre. She is absolutely deserving of the awards she has received, most notably Best Actress at this year’s Hong Kong Film Awards.

Probably the most surprising aspect about The Eye is how fantastic it looks. Where one might typically expect a horror flick to be dark and drab, The Eye is bright, colorful and beautifully filmed. This use of color and clarity is quite effective in assisting the audience to empathize with the protagonist; we see everything she sees, and as such, the emotional impact of what happens to her is that much more deep.

The only complaint I really have with The Eye is that the finale feels incongruous with the overall film. Up until the end, the movie develops its tension and builds fear slowly and subtly, but the climax is extremely over-the-top and more in keeping with what one might normally expect from North American horror. I do understand that much of this is done for the sake of a strong shock to the system, but I would frankly have been quite happy if the film had cut off before that explosive sequence.

It is this downfall that precludes The Eye from being one of my favorite films so far this year. In a story that is so deliberately paced that the directors probably know exactly when the audience will have goose bumps, it’s a shame that they had to tarnish the artfulness of it by inserting an ending that feels almost purposefully big budget. Nonetheless, I strongly recommend it for the outstanding performance by Lee and the detailed visual feast that the Pang brothers have created.