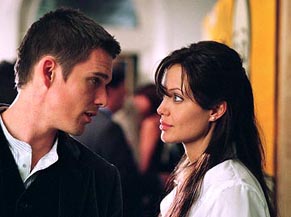 Taking Lives stands in stark opposition to its March thriller counterpart, Secret Window. Both films rely on a twist that is all too easy to decipher early in the proceedings, but where Secret Window still manages to be engaging and entertaining despite that fact, Taking Lives simply becomes an exercise in futility.

Another in an overly clichÚd series of female cop empowerment movies, Taking Lives centers around an FBI profiler named Illeana Scott, only this time it stars Angelina Jolie instead of Ashley Judd. For some inexplicable reason, Montreal authorities call on her expertise when a sly serial killer continues to befuddle them (wouldn't this fall under the jurisdiction of the Royal Canadian Mounted Police?). Illeana, a strange bird who sleeps in the graves of murder victims to gain some bizarre extrasensory insight into their unfortunate events, posits that the killer is choosing his prey because he wants to "steal" their lives.

During the course of the investigation, Illeana finds herself unexpectedly attracted to an artist who witnessed the murderer in the act of killing another man. Despite the fact that she generally isolates herself from other humans while in the course of investigating a crime, Illeana is tempted by the quirky painter, portrayed here by Ethan Hawke. Red herrings are tossed about as to the potential identity of the murderer -- is it one of her fellow officers? A stalker who appears to be shadowing the artist? The artist himself? Sadly, it's never too difficult to determine exactly which direction the film is about to take, especially with Philip Glass's score telling you EXACTLY! HOW! YOU! SHOULD! REACT!!!

Taking Lives is all the more disappointing because Jolie's performance is actually not bad at all. It's just another unfortunate case of very poor script selection on her part. She's convincing as an isolated woman with just a touch of yearning and she looks fabulous doing it, but the screenplay is so lackadaisical that it's just impossible for her to rise above the crappiness.

Hawke, on the other hand, is more annoying than anything else. His role requires him to be one of those sort of formerly nerdy, nondescript guys and though it's certainly easy to buy him as that character, it doesn't make for a good movie. Uma Thurman was right to shun him.

The film is also populated by a number of supporting characters that are given very little to do. Tcheky Karyo is always a dominating screen presence, but we just don't see much of him despite the fact that he plays the commanding officer of the Montreal unit investigating the crime. Jean-Hugues Anglade and Olivier Martinez are cast as the two lead cops on the case, and Martinez in particular leaves one longing for a bit more.

Director D.J. Caruso does give a valiant effort at infusing some style to make up for the lack of real substance. There are some genuinely creepy moments and the deliberate pacing is mostly responsible. The artful technique doesnĺt really make up for what is ultimately an agonizing couple of hours, though.

Probably the worst aspect of the film is its ending. Once youĺve figured out the twist, thereĺs literally no reason to go on, but Taking Lives still somehow manages to drag the story out to an ending that is less than satisfying. Thereĺs a distinct feeling that a more logical though perhaps less palatable denouement might have been filmed ľ one that was discarded due to poor testing. Iĺm not even sure that I would have liked my theoretical alternative better, but at least I might respect the boldness of the decision.

Abstract speculation aside, Taking Lives is an extremely uneven and occasionally mind-bogglingly dull film on the whole. The only thing that might have saved it would have been to burn the screenplay and start from scratch. Surely the book was better.