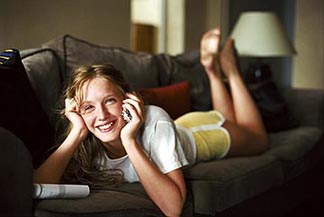 For a movie that is billed as a suspenseful thriller with a twist, Swimming Pool is one of the most languorous and deliberately paced films Iĺve ever seen. As it turns out, itĺs all a trick to lure the viewer into what is a treatise on the creative process. With nudity. Lots of it.

The movie begins with mystery writer Sarah Morton (Charlotte Rampling) visiting her editor ľ and possible paramour ľ John Bosload (Charles Dance). After a bit of prima donna-style behavior from the oh-so-uptight British novelist, Bosload suggests that she do a different type of book than usual, and that she should visit his country home in France for some relaxation and mental inspiration. When Sarah asks if he will be joining her, he mumbles something about his daughter and says that he will try.

Sarah arrives at the idyllic cottage and finds her surroundings to be very comfortable and relaxing. She relaxes in the sunshine throughout the day, sitting on the balcony outside her room that overlooks the swimming pool. When she needs supplies, Sarah walks into the village and shops at the market, and she discovers a lovely little outdoor cafÚ with a hunky waiter named Franck. She is writing.

That tranquillity is shattered with the arrival of Julie (Ludivine Sagnier), Bosloadĺs daughter. Unaware that her father is loaning the house to a friend, sheĺs a barely 20-something hottie with a mind to party. Not surprisingly, the two women butt heads rather frequently.

Part of the trouble stems from the fact that Julie is the neighborhood pincushion for the men. Skanky to the extreme, she brings home a different conquest every night (most of whom call her taste into question) and they go quite noisily about their business. Uptight Sarah is left with no other recourse but to wear earplugs, but thereĺs also a sense of intrigue as her voyeuristic tendencies finally get the best of her. She is writing more.

As Sarah watches Julie go about her daily business, she becomes more and more interested in the girl. One day, when Julie arrives home with a black eye, Sarah makes a seeming offer of truce as she asks the girl to go out to dinner with her. Julie suspiciously agrees, but the evening turns out to be fairly pleasant, with Sarah showing a real interest in her youthful counterpartĺs history, particularly her mother. Though Julie is somewhat secretive on the point, she does impart a few pieces of information. Sarah is writing furiously.

The film continues along this progression and finally reaches the metaphorical fireworks factory after about an hour and 20 minutes. From that point, thereĺs a Big Revelation that will likely be the subject of much discussion, but in actuality, it never gave me that ôA-Ha!ö feeling. And thatĺs really okay, because I donĺt think that was even what director Franšois Ozon was aiming to accomplish.

It should be noted that despite Swimming Poolĺs plodding tempo, the performances are really quite good. Rampling is very believable as an uptight, repressed writer. She even looks the part, as she physically resembles every female mystery writer I have ever imagined.

As for Sagnier, she embraces her inner bad girl with aplomb, imbuing Julie with the very essence of tackiness. Sheĺs also very, very willing to put her body on display, as she is either topless or completely nude for a substantial portion of her screen time.

The remaining players hardly matter, as the music and the cinematography are the other real stars. A torrid score from Philippe Rombi belies the lethargy of the actual pacing, making it feel as though more should be happening. Itĺs an elegant little trick that keeps the audience in tune to the proceedings even as theyĺre ultimately bored by them. Yorick Le Sauxĺs cinematography is lush and encompassing, with gorgeous mountain landscapes and yearning views of the titular swimming pool.

In the end, despite the fact that I am almost always drawn in by stories that so carefully illustrate the creative process, Swimming Pool unfortunately left me a bit empty. While many of the machinations to get to the end point are cleverly accomplished, the result is a film with portions that work very well, but just donĺt add up to a satisfying conclusion.

And given the fact that Ozon really didnĺt make the film for anyone much beyond himself, he could probably give a flip about what critics and viewers say. Like the author featured in his story, heĺs developing his own skills and choosing new directions, telling us that experimentation (in various capacities) is good for the soul. Though the movies are profoundly different and I liked Swimming Pool much better, it reminds me a great deal of Adaptation, which similarly thumbs its nose at the audience in its lack of cohesion. While I appreciate the effort, it feels like nothing more than a vanity piece, and my appreciation of the good parts just doesnĺt make up for the hollowness I feel at the end.