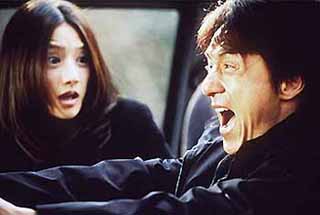 For Americans who are used to the blend of comedy and action that characterize Jackie Chan's most recent U.S. releases, such as the Rush Hour films and Shanghai Noon, The Accidental Spy will be a shock to the system.

Despite the likelihood that it will be classified as an action flick, The Accidental Spy is actually quiet, thoughtful and introspective. Teddy Chan has taken the highest budget ever for a Hong Kong film and run with it, as the production value, cinematography and musical score all blend superbly to make The Accidental Spy a truly beautiful movie to watch.

The story itself is fairly complicated and goes through a number of twists and turns. Bei (Chan) has an unfulfilling job as a salesman in an exercise equipment store. After his sharp eye helps him uncover and foil a bank heist, he is contacted by a private investigator who informs him that a wealthy Korean may be Bei's long-lost father. Bei learns that this mysterious Korean is on his deathbed and wishes to be reunited with his son before he passes away. So our hero heads to Korea and meets the man, who challenges Bei to play a game of sorts, which leads Bei to Turkey and puts him solidly in the middle of a biological warfare plot.

The Accidental Spy provides a sharp contrast to the frenzied pace of Rush Hour 2. The former moves at a very deliberate tempo, which makes the action sequences and fight scenes stand out. Unfortunately, the fight scenes are few and far between, though one in particular is exemplary in its humor and creativity.

It should also be noted that The Accidental Spy lacks the humor of Chan's U.S. releases (and a number of his Hong Kong films as well). The film starts out with several light-hearted, amusing incidents, but as the story unfolds, the tone turns considerably darker and more serious, which actually gives Chan the opportunity to exercise his acting chops. He's quite good in a role that requires him to cover a broad range of the emotional spectrum. In fact, the quality of the supporting characters is so unimportant that the performances by the actors playing them become insignificant. There is little doubt that The Accidental Spy is Jackie Chan's movie.

Still, despite the movie's grandeur and Chan's surprising ability to be convincing in a multi-layered role, The Accidental Spy left me a little cold. Naturally, I was disappointed that the exemplary fight sequences I've come to expect were missing, but that may just be evidence that it's time to face the fact that Chan isn't getting any younger. And while I generally really enjoy movies that employ a more subdued pace, I found myself wishing the story would just hurry up and move along.

Of course, it's entirely possible that my opinion of the entire movie was tainted by my dislike for the derivative "big action finale." Although it provided some genuine tense moments and some amazing stunt work, I couldn't help being annoyed that this portion of the plot was basically lifted straight from a U.S. action flick that is several years old.

Nonetheless, I have to give The Accidental Spy a mild recommendation. Due to be released wide in the U.S. in December of 2001, a film this pretty certainly deserves to be seen on the big screen. Plus, it should prove to be a nice companion piece to Chan's upcoming March release, The Tuxedo, in which he will play the unwilling spy role for a second consecutive time. Either way, it's an entertaining ride that shows dimensions of Jackie Chan that U.S. audiences have likely never seen before, and The Accidental Spy is well worth the price of admission for that reason alone.