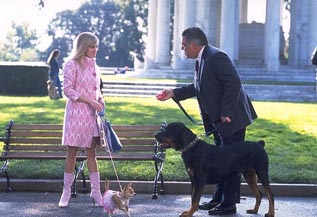 I readily admit to being one of those people who actually enjoyed the first movie. Irreverent and silly in a good way, the popcorn flick took a number of stereotypes and turned them on their heads with the goofy heroine Elle Woods, played by the talented Reese Witherspoon. Elle was the very definition of the typical conception of a sorority chick, from the pink wardrobe to her high-pitched squeals. In the end, though, she wound up rising above expectations, graduating from Harvard Law School and positively affecting anyone who came into her path.

For Legally Blonde 2, Elle returns for a lot more of the same, with our legal eagle being transported from the hallowed halls of Harvard to the corrupt political world of Washington, D.C. She makes this decision to move after a search for her dog Bruiser’s mother - she wants this “dog-in-law” to be at her wedding, but finds that the unfortunate Chihuahua is the subject of some animal testing for a cosmetics company. Elle determines that she must put a stop to this brutality and determines that the best way to affect change is go to the nation’s capitol and pass a bill prohibiting this cruel treatment.

What this means is that we see substantially less Luke Wilson (though that’s okay since I have yet to forgive him for Alex and Emma) and Jennifer Coolidge and much, much more Reese. Along the way, she comes into contact with an assortment of corrupt and straightforward political types, and these various little episodes are really what make up the bulk of the film’s scattershot attempts at humor.

For Witherspoon’s part, her method for portraying Elle in this sequel is taking the character and dialing her up several notches. She’s more perky, more pink, more positive, and more pert than at any point in the first movie in the series. Her upbeat Pollyanna take on life crosses over from personal life to her work career, and naturally, her vigorous attitude has an impact on everyone she meets, either for good or bad. Though Reese has a pretty clear grip on the character, it just goes a bit too far in this film - Legally Blonde 2 pushes virtually every cliché possible, from uptight conservative Southern congressmen to overenthusiastic sorority chicks with a phone tree and a purpose.

The movie co-stars Sally Field (and has an innocuous reference to her “you really like me” speech that you’ll miss if you blink) but she’s simply not cut out for the heel turn. A textbook example of a boss who blames her employees for her bad judgment, her congresswoman is basically the villain of the piece but her motivations seem very slim.

Also present as the doorman who knows everything is Bob Newhart, who might be the only worthwhile reason to watch Legally Blonde 2. His deadpan delivery is decidedly appropriate for the character, and his interplay with co-star Witherspoon feels genuine and heartfelt.

There are a number of other new Washington, D.C. characters who are important to the story. Primary amongst these are Elle’s coworkers, some of whom make fun of her but ultimately find themselves charmed and amazed by her capabilities. Regina King, who probably got tired of a similarly hammy actor in Cuba Gooding, Jr. in Jerry Maguire, is Elle’s nemesis of sorts. She portrays Representative Rudd’s (Field) Chief of Staff, and finds herself frequently butting heads with her new associate. The very caricature of an angry young woman, she’s capable in the role but one gets the feeling that she could do much more with a better part.

Other coworkers include Mary Lynn Rajskub as Reena, the timid and mousy brunette, and J Barton as Timothy, the boy on whom she has a crush. Rajskub is actually rather charming in the small role but Barton’s character seems as though he’s coming straight from a sitcom.

The only other parts that have any significance belong to Dana Ivey, who appears as a congresswoman who just happens to be a member of Elle’s sorority, and Bruce McGill as stalwart Congressman Stanford Marks. Ivey is just totally off the mark -- no real 50-something ever acts like that, even when they come into contact with a “sister,” but McGill continues to show that he’s a terrific character actor with polarizing gruff but gentle qualities.

With performances that are spotty across the board along with a story and tone that are just too insipid for words, Legally Blonde 2 is one of those movies that feels as though it is sucking IQ points from your brain as you watch it. It tries too hard to take the gimmick to a higher level and in doing so, becomes nothing more than an exercise in eye-rolling.