Classic Film Reviews:
The Killing and Paths of Glory

I recently had the fortunate opportunity to view two of Stanley Kubrick's earliest directorial offerings on the big screen. The Killing was released in 1956 and was adapted by Kubrick from Lionel White's novel, Clean Break. Paths of Glory, which was released the following year, is a cinematic masterpiece and certainly merits its #39 ranking among IMDb's top 250. While I doubt many people will have the chance to see these films in a theater as I did, I certainly believe they're worthy of a rental, particularly for Kubrick aficionados or just fans of classic movies in general. (Programming note: The Killing will be featured on Turner Classic Movies on September 21st at 9 a.m. eastern.)

A film that clearly influenced filmmakers from Quentin Tarantino to Steven Soderbergh to Curtis Hanson, The Killing is a tautly plotted, noir-style tale of a well-organized group of men who formulate an intricate scheme to rob a horse track. Primary amongst these is the tremendous Sterling Hayden, the man with the plan and an ex-con who is looking to score enough cash that he can settle down with his sweet girlfriend, even though (as she points out in a hilarious bit of outdated dialogue) she is neither smart nor pretty. The other players in the scheme all have their own specific reasons for participating, and it is impressive that these characters are so intricately and meticulously illustrated in a movie that clocks in at under an hour-and-a-half in length.

Particularly noteworthy in his performance is Elisha Cook Jr., who plays the wide-eyed, henpecked husband to the viciously gleeful Marie Windsor, who has many of the movie's best lines as she schemes to undermine the conspiracy for her own self-interests. Another treat is Kola Kwariani, whose chess-playing tough guy is unique for the time. A former wrestler who I can best describe as a brainiac Tor Johnson, The Killing was, regrettably, his only film.

The editing of The Killing is incredibly sharp, which is important as the film plays with chronology in a non-linear fashion at some of the crucial moments, much as Pulp Fiction, Reservoir Dogs and The Limey have many years later. The film is shot in black-and-white, and the atmosphere is appropriately bleak and cynical, leading up to an ending that just feels highly fitting.

As I mentioned, the movie does have a short running time, and there are no wasted moments. The dialogue and action are crisp and precise, and the movie is never dull. Accentuating this pace perfectly is Gerald Fried's outstanding score and the story narration by an uncredited Art Gilmore, who was the voice of a number of "So You Want to..." informative films in the '40s and '50s.

I do feel obliged to point out that some of the dialogue is archaic enough that The Killing provides a number of probably unintentionally hilarious moments. In a film that is obviously meant to be dreary and dark, these moments could be seen as flaws, but I actually found that they added a great deal to my overall enjoyment. Or perhaps we were meant to laugh at the absurdity after all. 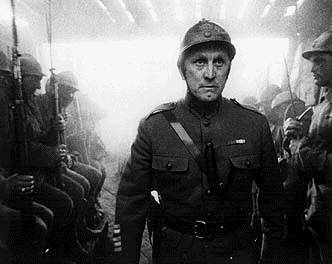 While it's astounding that Stanley Kubrick was already hitting his stride at age 28 with The Killing, it's downright astonishing that he was able to complete a masterpiece like Paths of Glory within a year, and with only his second major-studio production.

Paths of Glory takes the trenches of the battles between France and Germany in World War I and turns them into a setting for the theater of the absurd. Kirk Douglas (in a tremendous performance) is Colonel Dax, a man who commands a highly-reputable division in the French army. Dax is ordered by General Mireau (brilliantly and menacingly played by George Macready) to lead his men into what he knows is bound to be a mass slaughter. As he is walking through the trenches to head the charge, the audience is presented with the gripping reality that one out of every two men Dax passes as he makes his way will be killed in the battle. It's one of the more visually impactive scenes I have ever witnessed in any film.

As the conflict on the battlefield begins, we are made to question what qualifies as courage versus cowardice over and over again. When the arena shifts from the front lines to a military court, those same themes are emphasized. The individual who consistently denigrates those who show weakness in their resolve is revealed by his actions to be perhaps the most insidious coward of all.

Is our hero Colonel Dax, who is forced to choose between what is right for his men and what the French army, newspapers and public demand? While he is certainly the character who seemingly has the highest moral standards, he does toe that line and causes the viewer to recognize that dichotomy. Or are the three men who face court martial as an example to the troops our champions? And what is "dying bravely?" These questions are never precisely answered, and the audience is left to draw those conclusions for themselves as the different characters each walk their own "paths." The questions raised are particularly poignant as our own nation prepares for war with an enemy which has committed acts that have been labeled as "cowardly" in their own right.

In addition to Douglas and Macready, the movie features fine acting from a number of individuals, most notably Adolphe Menjou as the inconsistent General Broulard, who is a different kind of monster than Dax's commanding general, and Ralph Meeker's conflicted Corporal Paris, who is given rein to work through an array of emotions.

By the time the movie reaches its affecting and completely unique ending, the audience is taken through a riveting account that portrays war, the military, and the actions of even the best of men as terrifying and irrational, though the viewer is allowed to walk out of the theater with the slightest spark of hope that good men might be the ones who prevail in the end.