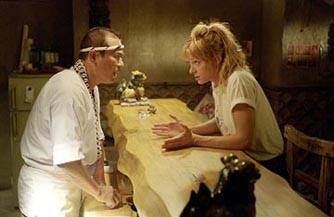 Kill Bill is a movie of extremes.

While the over-the-top approach is likely to alienate more mainstream viewers, the tactics used by director Quentin Tarantino work boldly as a cinematic effort that enigmatically manages to be both inventive and derivative, but also consistently ingenious.

From the very outset, Tarantino hits hard and heavy on the pop-culture references, though the many allusions and direct lifts from Japanese cinema might be too obscure for universal recognition. Still, for fans of Asian film, Kill Bill is quite a tasty morsel, from Uma's yellow Bruce Lee/Game of Death jump suit to Shaw Brothers references, not to mention Kato-style masks and the inspired casting of Japan's greatest martial arts star as a character he made famous on Japanese television. Fans of anime will also recognize some typical themes and conventions, some overt and some subtle.

If Tarantino's Pulp Fiction helped propel Uma Thurman to stardom, Kill Bill establishes her as a versatile and intuitive talent. She is simultaneously menacing and vulnerable as a woman who has been betrayed by her former cohorts and is hell-bent on having her revenge. She's in hot pursuit of the assassins who made her wedding day a bloodbath, leaving her for dead with a bullet in her head. These killers are a marvelous mixed bag, and all are members of the hit team known as the Deadly Viper Assassination Squad.

The first of these ladies is Copperhead, portrayed by Vivica A. Fox. The audience is introduced to her in a surreal sequence of events that will set the tone for the rest of the film. A criminally under-rated actress, Fox is outstanding in her limited screen time and shifts brilliantly through the range of emotions required to make her segment of the story work.

Perhaps the cruelest of the bunch is Daryl Hannah's California Mountain Snake. Although her screen time is fairly brief, she does a masterful job of establishing her character's motivations and quirks.

The remaining female member of the squad is Cotton Mouth, played by Lucy Liu. She rightfully gets the bulk of the attention here as her character is by far the most interesting. Named O-Ren Ishii in the "real world" of Kill Bill, she is a powerful mafia leader in Tokyo and a serious force to be reckoned with. She employs a massive squad of her own, including a terrifyingly dedicated 17-year-old named Go Go Yubari (Chiaki Kuriyama), to carry out her dirty work.

There are members of the squad that we don't quite get to know in this first installment of the story (Kill Bill Volume 2 is slated to hit theaters early next year), including Budd (Michael Madsen) and the titular Bill (David Carradine). Both have very brief time onscreen (we never even see Bill's face), but we still somehow manage to learn much about their characters.

As mentioned before, the casting coup is certainly Sonny Chiba as Hattori Hanzo, a character he made famous in the '80s Japanese TV series Shadow Warriors. He is simply fantastic in his role, which requires him to use slapstick humor at times, and to be deeply serious at others.

As is so often the hallmark of Tarantino's films, Kill Bill Volume 1 is distinct in its use of fractured time. It doesn't follow quite the frantic pace of Pulp Fiction, though. Instead, Tarantino employs a loosely episodic method of telling his story by dividing it into individual chapters. By doing so, he is able to use vastly different styles to carefully lure the viewer in. At one moment, the action will be hot, heavy, and so intense that it almost leaves one breathless, but then he'll shift to a deeper, slower tempo that is much more dreamlike in quality.

The set design in Kill Bill Volume 1 is really nothing short of spectacular. The story takes its characters all over the globe and as such, a deft hand is required to keep the shifts in scenery seamless. From the picture-perfect Pasadena home to the dusty outskirts of El Paso, the setting later shifts to a Tokyo so gorgeous that it could be a travel advertisement. Taking things further, the movie's most remarkable sequence moves from a glitzy night club to a fight before a blue screen to the final climactic battle in a lovely, snowy garden.

The very dark comedy that pervades Kill Bill is definitely not going to suit all tastes. In fact, from time to time, I felt a little bit sick for laughing at the events unfolding onscreen, but that's deliberate on Tarantino's part. Suffice it to say that Tarantino has effectively captured the essence of the humor present in all of the best Asian chop socky films and translated it to this North American product.

Much of the reason that the humor is so uncomfortable is that it derives from the heady amount of violence that is the film's constant. To say Sam Peckinpah would be proud is an understatement, as there is little doubt that Kill Bill Volume 1 is not for the squeamish. Even so, the bloodshed feels very comic book inspired, particularly for anyone who has ever read Garth Ennis' Preacher or any number of Japanese manga. Limbs fly everywhere and blood spurts forth from bodies in a manner that constantly reminded me of the Monty Python Peckinpah spoof, which is a good portion of the reason that I let go and laughed even when it felt highly inappropriate.

Perhaps the best indication of Kill Bill Volume 1's excellence is the fact that it undeniably leaves the viewer clamoring for more. Given the fact that it was initially intended to be only one movie, that's natural, but it is a real credit to Tarantino that the editing is so potent that it creates huge anticipation for events to come. Kill Bill Volume 1 is easily one of the best movies of the year and should provide for some fantastic commentary when the two volumes finally hit DVD shelves together.