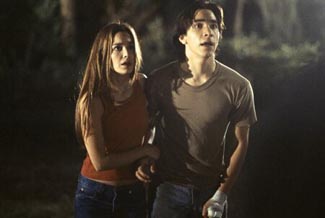 In a year when I have vehemently loathed more movies than perhaps any year previous, the chances that a new contender to the Worst of 2001 throne will emerge are limited at best. Monkeybone, Swordfish, Tomb Raider and Planet of the Apes have assuredly each made their individual cases as to why they should own that title, and I might have had a hard time choosing between them were it not for a sublime piece of garbage that was recently released.

This horrifically awful movie is called Jeepers Creepers, and I have made it my mission to save as many people from the misery of sitting through this tripe as I possibly can. Lest you think I'm kidding, I was recently standing in line to buy tickets at a theater and overheard the mother and daughter standing behind me arguing about whether to see Jeepers Creepers or The Others. Suffice it to say I didn't hesitate to point them in the right direction. So shines a good deed and all that malarkey.

If it's too late for you, I offer my sincerest apology. At least you know now that you don't suffer alone. Those who remain unscathed can read on for a more detailed warning.

The movie opens by introducing us to Darry and Trish, teenage siblings on their way home from college for a visit with their folks. For some inexplicable reason, the kids have chosen to take the long way home, despite the fact that there are practically no amenities available, not to mention the brutal murder of some kids from their town that took place on that same road many years earlier that clearly has Darry a little creeped (ha ha!) out. Oh, and they use Trish's car as opposed to Darry's, even though it's a heap of junk that doesn't quite like to go into gear. Long, isolated road, car on the verge of a breakdown…yup, that's fine planning, all right.

As they're driving down the road, this giant refurbished Schwan's truck starts chasing them, sounding an awful horn blast, and eventually forcing them off the road. Both Darry and Trish are completely freaked out by this turn of events, as you might imagine, but oddly enough, it must simply have been some guy with a need to let out some road rage, because he takes off once their car is sitting in a field. If this strange sequence of events had happened to me, you'd better believe I'd be driving home as quickly as my crappy car would allow me to go. But no. The siblings soon drive by a dilapidated building and the Schwan's guy is parked outside. And oh yeah, he's stuffing white bundles with red blots on them down a pipe. Coincidentally, these bundles would appear to be the right size and shape to be a human body. Again, drive quickly past until you get as physically far away from this nut-job as possible, right? Wrong. Darry points out that it is their social responsibility to check and see what's down in the sewer. Trish reasonably disagrees and logically points out that they could call the police in the next town, but Darry's driving, which means he not only gets to pick the music, but he gets to make all the vital decisions.

So they stop. And Darry yells down the tunnel. Whoa! He thinks he hears something! I'm sure you've guessed what happens next. That's right. Darry and Trish go back to the car and drive to the next city to call an ambulance and the police and continue for home, where they have a lovely visit with Mom and Dad. I wish. At least my torture would have ended quickly.

No, instead Darry instructs Trish to hold him by the feet while he dangles down inside the pipe to look closer. His sister sagely points out that this is the kind of thing that people do in horror movies that makes everyone hate them. See how they poke fun at themselves? Yeah, well, she's right.

Are you convinced to avoid this movie yet? Because I've only told you about the very beginning of the film and I could certainly go on. I could tell you that they wind up at a restaurant where nobody believes their story, even though they've clearly been through the wringer. I could inform you that they meet a psychic who is played by a woman who is perhaps the worst actress in the history of mankind. I might even say that the demon/villain is so completely not scary that the audience in my theater laughed hard many times when he was onscreen. Of particular hilarious note is a scene where Trish (or Darry; really, is it important?) attempts to run him over with the car. Like some limber Jackie Chan wannabe, he jumps on the car and runs over the hood, doing a back-flip and nailing the landing.

And never mind that the cops and emergency workers are complete rubes who have no idea how to handle criminals, let alone their own…but I digress, and I imagine you've heard more than enough. I would like to comment that I place all of the blame for all of this rot solidly in the hands of its writer/director, Victor Salvo, who was vile and detestable for past actions before Jeepers Creepers was even a concept. The story is abhorrently foul and the ending is contemptible. The effects are…well, the movie was made for $10 million. That should really explain it all.

I seriously cannot say enough bad things about this movie. In fact, the only positive I can offer is that at least it was unintentionally hilarious in spots. Nevertheless, those couple of laughs aren't even enough to even qualify Jeepers Creepers as a "so bad, it's good" movie.