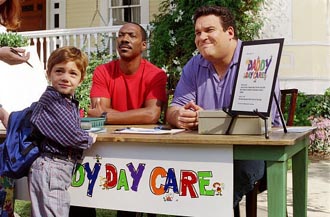 It’s a virtual calm between two very large storms as we bathe in the afterglow of X2’s mammoth opening and giddily anticipate the upcoming behemoth that is The Matrix Reloaded. We’re solidly nestled in the weekend between the opening for the two blockbuster quality films, and look toward a frame where the only new movie hitting theaters in wide release features recent box office albatross Eddie Murphy.

In 2002, Murphy starred in three major motion pictures, and all of them were enormous financial disappointments. He started off the string of bombs with Showtime, in which he costarred with Robert DeNiro. That film opened with a middling $15.0 million, finishing at only $38.0 million overall. Things got steadily worse with the release of The Adventures of Pluto Nash in August. That film was an unmitigated disaster, garnering a paltry $2.2 million in its opening weekend and a pathetic $4.4 million by the time it was quickly put out of its misery. Finally, Murphy closed out a year he’d probably rather forget with a re-imagining of the ‘60s television show I Spy. Even the usually delightful Owen Wilson couldn’t rescue this turkey - I Spy made $12.8 million during its opening weekend and wound up making a total of $33.1 million.

You’d think that such a string of garbage might indicate that it’s time to stick a fork in Murphy, but he’s emerged like a cockroach from the ashes in similar situations before. After a bunch of bombs like Vampire in Brooklyn, Metro and Holy Man, the former Saturday Night Live performer was nonetheless able to come back huge with films like Life, Nutty Professor II, Shrek and Doctor Dolittle and its sequel. Thanks to the fact that the folks at Sony and Revolution Studios know their target audience and have designed a superior marketing campaign for Daddy Day Care, Eddie’s latest has all the earmarks of being a film that will have insiders calling him the Comeback Kid again.

If you’re a parent, chances are you’ve been hearing a lot about Daddy Day Care, the story of two dads who open their own day care center after they are laid off and are forced to become stay-at-home dads. Though the commercials make heavy emphasis on the potty jokes prevalent throughout the film, if Scooby-Doo taught us nothing else last year it’s that kids love crude humor. The studio has done a fantastic job of emphasizing the elements that children find hilarious, and I can personally attest to the fact that the marketing has worked. I tried to attend an early screening of the film a few days ago, and more tickets were given out than there were available seats, resulting in more than 100 people being turned away at the door.

Topping it all off is a solid theatrical release in 3,370 venues, giving wide awareness for what is going to be a family event film. Expect Murphy to be golden again as Daddy Day Care will notch another success for the steamrolling Revolution Studios. A debut weekend total of $31 million seems to be a reasonable expectation, though that amount likely won’t even be good enough for the number one spot on the charts.

That honor should again go to X2, which should drop rather significantly due to its monster opening; however, since it was well-received like Spider-Man last year, that decrease in business probably won’t be as sharp as it is for many blockbusters. In many cases, that depreciation can amount to as much as 60% of opening weekend business, but for Spider-Man, a critical and audience success, that number was a fairly anomalous 37.8%. We’ll split the difference a bit for X2 and estimate a drop of 46%, which should give the film a solid second weekend total of $46.2 million.

After the top two, the box office for the remaining films will be a bit anti-climactic with the exception of A Mighty Wind, which expands into wide release this weekend. This folk music mockumentary from the same people who previously found a cult audience niche with Best in Show, Waiting for Guffman, and the infamous This Is Spinal Tap has been an outstanding performer in only a limited number of theaters, earning $6.2 million in three weeks. A three-day total of around $2.9 million should be in order.

We’re really all just biding our time until Down with Love hits theaters, anyway. Right?