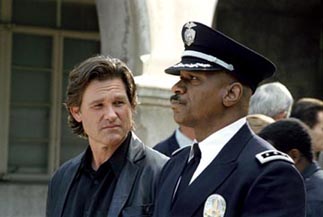 Kurt Russell is one of the most under-appreciated actors working in showbiz today, and his performance in the little-seen cop drama Dark Blue is a testament to that fact.

Lending his talents as grizzled detective Eldon Perry, Russell virtually carries the film as he portrays a long-time detective who frequently works outside the law by capturing the nuances of the character with an understated subtlety. It would have been easy to degrade the role to a scene-chewing farce, but with someone as skilled as Russell, bad cop Eldon Perry becomes a fascinating study into the societal and familial events that cause a man to lose sight of morality and real justice.

Perry's story is set amidst the tumultuous times of the Rodney King trial, even incorporating actual footage of the brutal beating into the introduction of the story. The scenes displayed on screen are certainly hard to stomach, particularly as they are much more graphic and extreme than those that were shown on every single newscast across America as the shocking story unfolded.

Smack dab in the middle of the LAPD controversy are Perry and his young partner Bobby Keough (Scott Speedman), who are working undercover on a drugstore murder case even as the trial of their fellow police officers in the King case carries on. As the movie begins, we learn that the nature of their work is not always on the up and up, as Keough is sitting before an Internal Affairs hearing to determine if his shooting and killing a suspect was justified. It is rather quickly revealed that it is Perry who really pulled the trigger, with the grizzled veteran using his partner to shield him due to the fact that he has been investigated for similar activity all too many times before.

Meanwhile, there's a bit of a power struggle going on as Keough and Perry's boss Jack Van Meter (Brendan Gleeson) and high-ranking African-American officer Arthur Holland (Ving Rhames) are locked in a battle for ultimate department supremacy. On the one side, Van Meter represents the sleaze that appears to be running so rampant, while Holland is the steady hand who might provide the only opportunity for a real turning point. The various players, including cops, informants, and serious bad guys are used as chess pieces in this very heavy examination of corruption and misguided intentions.

If the story sounds a bit like a more modern-day L.A. Confidential, that's partially because the concept was developed by the author of the novel on which that film was based: James Ellroy, who is also responsible for other such cynical explorations of cop society as Black Dahlia, White Jazz, and The Big Nowhere. Dark Blue definitely has the same tone of the earlier Oscar-nominated L.A. Confidential, as a web of intrigue is spun that has the viewer rooting for protagonists who are somewhat less than savory characters.

The screenplay itself is adapted by David Ayer, who was also responsible for the earlier good cop/bad cop drama Training Day. Under the capable direction of Ron Shelton (Bull Durham, Tin Cup), Dark Blue has an extremely gritty, somber, and atmospheric feel. In particular, the riots that took place in the aftermath of the King verdict are recreated in a realistic fashion, but without condemnation or judgment.

Much of the film's success rides on its lead performances, as is evidenced by the fact that Russell is so vital. His Eldon Perry is a man without conscience, but pieces of the story reveal that his reactions and opinions have been carefully cultivated by a vicious world, including a father who ingrained racism, shady ethics and hatred at a very early age. Countering Perry's detachment with a desperate ambivalence and guilty conscience is Speedman's Keough. Though Speedman had been primarily known for parts in nighttime television up to his role in Dark Blue, he turns in a terrific, understated performance here, particularly in light of the fact that he's working with some intimidating talent.

As two sides of a different coin, Gleeson and Rhames are startlingly strong. Gleeson oozes slime and as such, almost always wears his bad intentions on his sleeve (an approach that is markedly different from that of L.A. Confidential). On the other hand, Rhames' upstanding character is believable in his morality because he is proven to be imperfect himself, evincing the fact that in stories like these, there is rarely a simple explanation.

Dark Blue could have been one of the year's most under-rated films had it not taken a severe misstep at the climax and denouement. A movie that builds up as a twisting and turning tale of degrees of good and evil winds up on a preachy, heavy-handed note that feels dramatically out of place with the events that come before it. It's a huge disappointment after the intelligently crafted story that occurs up to that point.

Still, I do recommend the film on the strength of its actors and the illustration of a world that is simultaneously alarming and fascinating. Whether that level of dishonesty and fabrication truly exists in our police departments is a question for another day.