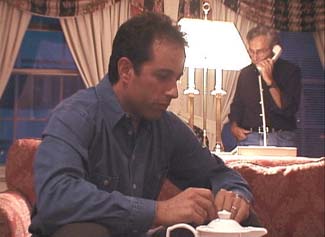 Being a comedian looks easy, doesnĺt it? I mean, all these guys really do is get up on stage, make some biting or satirical comment about everyday life, and elicit laughs. The rewards are limitless, too. If laughter is the best medicine, comedians ought to be the healthiest people on the planet.

The reality is that like anyone who struggles through the creative process, the people who exist to make us laugh go through the same insecurities, self-loathing and interior struggles as book authors, musicians and screenplay writers. Comedian is a wonderful documentary that takes the viewer through the many life cycle stages of a stand up artist.

The bulk of the movie belongs to Jerry Seinfeld, since the camera is primarily following him as he develops a new act after being on hiatus for an extended period. Rather than go back and use his old material, Seinfeld has decided to create all-new material and introduces it to eager audiences in slow stages. Sometimes he finds success, on other occasions he falls flat, but the ride to the finish is constantly fascinating.

It would have been easy to just follow Seinfeld around from germination of early ideas to final triumph, but this documentary takes a different approach. Instead, we get a look at other comedians who work the same clubs with Seinfeld, and itĺs an eye-opening bit of film-making. We start off by seeing some of the former NBC starĺs candid discussions with his compatriots; Colin Quinn, formerly of MTVĺs Remote Control and Saturday Night Live, is simultaneously supportive, indignant and incredulous as he watches his peer try to re-emerge as one of the preeminent stand-up comics in the business. Other famous faces include Robert Klein, Garry Shandling, Jay Leno, and Chris Rock.

Highlighting the youth movement for a large portion of the film is angry young man Orny Adams. Heĺs a new comedian attempting to break out huge, and provides a fantastic illustration of the frustrations inherent with creating to entertain for others as well as being a complex personality who punctuates the neuroses of Seinfeld himself.

Like all aspiring stand-up artists, Adams wants desperately to be famous and for audiences to appreciate his work. Even as he struggles to attain that success, itĺs clear that Adams has complete disdain for both his actual audience and those who would dismiss him. There are numerous scenes where he spews plentiful amounts of bile as he is incredulous at the reaction of the crowds at his shows, yet he wants nothing more than for these same people to approve of him. Not only that, but in one breath heĺs kissing up to heavyweight Seinfeld, but stabs him in the back almost as soon as he leaves. Adams is a fascinating character to watch and an amazing display of an artist dealing with his demons.

On the flip side, as the movie begins to draw to a close, Rock is telling Seinfeld about a great comedian who has been killing audiences with his most recent routine. The grizzled veteran who is the subject of the conversation has been doing two and a half hour shows with no intermission, and itĺs quite apparent that this fact hits Seinfeld hard, particularly as he has struggled to refine his act to even the 45-minute mark.

The comedian in question is none other than Bill Cosby, and eventually, Seinfeld is given the opportunity to talk with him. He tells Cosby that knowing him is the highlight of his career and is clearly delighted to be in the presence of such greatness. More striking, though, is Cosbyĺs complete serenity, which is a complete contrast to both Adams and Seinfeld. Whether itĺs because heĺs done it for so long or just because he loves his job completely, Cosby is at peace with what he does and finds real pleasure in being funny for people.

He completes the full circle and provides a final sense of closure to a film that is constantly engaging, occasionally hilarious, and often poignant. For any artist who struggles with creativity, Comedian hits home and pulls no punches. The documentary format only makes the mix more potent than it might have been as a simple fictional story or comedy concert movie.