Drawn That Way: The Lion King 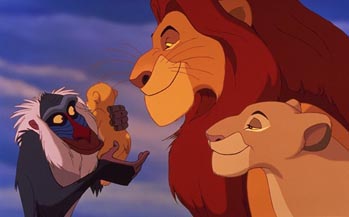 At very long last, one of the greatest animated movies of all time (and my particular favorite) is being released on DVD in a special collector's edition package from Disney. With a compendium of talent that is absolutely awe-inspiring, The Lion King is a film for the ages and the high watermark of Disney's modern-day creative output.

On a personal level, I have very distinct memories of this movie during its creation and ultimate release. Before it was released, Disney managed to build fantastic buzz by releasing a preview on the Aladdin videocassette, thereby ensuring that its groundbreaking visuals were generating word-of-mouth long before the movie's release.

Other than Return of the Jedi (don't ask), The Lion King is the first film I can ever remember consciously going out to see on opening day. I was planning to go with my sister and some friends, and the guy who was getting our tickets was only able to secure them for the late show as all the others were sold out. We all gathered together and sat down in a giddy anticipation that belied our ages.

From the opening note, I was in love. A movie that is centered so carefully around the circle of life ends precisely where it begins -- and with the same thundering final drumbeat. After raving about it for a few weeks, I saw the film again with a dear friend. If it was possible, I enjoyed it even more.

Since that time, I naturally purchased the video as soon as it hit stores. In the years since, that tape has become very well-worn to the point that it almost won't play. While anxiously awaiting the DVD release, I was able to see the IMAX release, which was akin to a religious experience. As Sports Night's Dana Whitaker says after viewing the Broadway production of the story, "It was like…church. I didn't know we could do that. Did you know we could do that?"

Along with its deliberately designed thematic elements, The Lion King truly comes to life on the strength of its fantastic voice talent. Jonathan Taylor Thomas, who was one of the biggest young stars in the country at the time thanks to his role on the top-rated Home Improvement, provided the "early years" voice of primary character Simba. For that portion of the movie, the voice of Simba's father is the commanding James Earl Jones, a man who will be eternally connected to Mufasa as much as he is to Darth Vader and CNN. In a casting choice of pure genius, Madge Sinclair is the voice of Sarabi, Simba's mother. While the name might not be recognizable, her appearance as Mufasa's "wife" is an inspired bit of work since she had just appeared as Jones' wife and queen in the Eddie Murphy hit Coming to America.

When The Lion King was released, I was in the process of discovering the brilliance of Blackadder, the BBC comedy series that starred and was occasionally co-written by Rowan Atkinson. Imagine my delight when I recognized his unmistakable accent and humor in the character of Zazu, a hornbill and Mufasa's majordomo.

Possibly the best voice actor in the film is Jeremy Irons as Scar. He infuses the insidious character with iniquity and ironic wickedness. There's even an homage to his Oscar-winning role in Reversal of Fortune as he and Simba share an exchange that is a direct lift from that film:

Simba: You're so weird.
Scar: You have no idea.

Scar has at his disposal three hyena henchmen, Shenzi (Whoopi Goldberg), Banzai (Cheech Marin) and Ed (long-time voice actor Jim Cummings). Goldberg and Marin are outstanding choices for the roles, as they inject a lot of humor into situations that are occasionally just too scary for kids.

Then, during the second half of the movie, Simba grows up and is voiced by Ferris Bueller himself, Matthew Broderick. He's a good choice for the part as he has a very youthful sounding voice that amply demonstrates the fact that Simba is on the verge of adulthood and the acceptance of his responsibilities.

It is during the second portion of the film that we are introduced to the comic relief. In an unforgettable pairing, the then-Broadway actors Nathan Lane and Ernie Sabella were just the thing as jungle buddies Timon and Pumbaa. The unlikely pairing of a meerkat and a warthog as a comic duo provided top-notch humor, chemistry and timing. The two were so beloved that they even got their very own Disney Channel series.

Though not a huge name in Hollywood, The Cutting Edge's Moira Kelly is solid as Simba's love interest Nala. The icing on the cake, though, is the amazing Robert Guillaume as mystical baboon Rafiki. Though his appearance in the film is actually comparatively brief, he provides one of the more subtly impressive voice performances I have ever seen (heard?).

With all of the amazing voice talent, if I ever had one concern going in, it was the fact that Elton John had a hand in creating the music. I have never been a fan of the flamboyant musician, but the honest evaluation is that when his music is placed in movies, it somehow manages to win me over. From Tiny Dancer on the bus in Almost Famous to Your Song in Moulin Rouge to his bright compositions in The Lion King, I've been suckered in time and time again despite my most hopeless expectations. He co-wrote much of the stuff with Tim Rice, which probably makes it a little better. The score itself is near-flawless under the talented hand of Hans Zimmer, who is perhaps my favorite theatrical composer ever, aside from Joe Hisaishi).

Much has to be said about the amazing visuals that were groundbreaking at the time of the movie's release. In particular, the early scene that faded from ants marching on a leaf to a herd of giraffes is breathtaking; the wildebeest stampede is stunning.

Not surprisingly, this great look and overall coherence are the responsibility of some pretty talented people. If production designer Chris Sanders' name seems familiar, it's because he is the creator/director/writer/voice of Experiment 626 -- Stitch. From there, the writers have resumes that include The Hunchback of Notre Dame, Hercules, James and the Giant Peach, The Sure Thing, and Beauty and the Beast. Co-director Roger Allers had previously written The Little Mermaid at that time, and also went on to co-write the under-appreciated Emperor's New Groove. Also at the helm was Rob Minkoff, who had been responsible for the Roger Rabbit shorts Tummy Trouble and Roller Coaster Rabbit. He has since moved on to direct both Stuart Little films (which are marvelous and also underrated) and the upcoming Haunted Mansion.

All of this talent works remarkably well with a tightly crafted story that smacks of Darwin and Shakespeare. Every act flows together seamlessly as the Circle of Life continues on…and on…and on. Seeing the big black screen with the simple words "The Lion King" as the drums crash is an experience that gives me goosebumps to this day, and the fact that it's getting an ultra-special treatment on DVD is definitely cause for celebration. Hakuna matata!