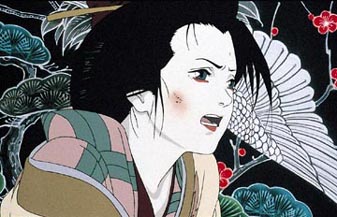 For the second consecutive year, one of the best movies to receive a theatrical release is animated and from Japan. While last year it was Spirited Away that captured the hearts and minds of kids of all ages, in 2003 the champion is Millennium Actress, a lushly gorgeous and uniquely structured film that is both a romantic love story and an ode to classic cinema.

Directed and co-written by Satoshi Kon (Perfect Blue), the composition and plot of the film are somewhat difficult to describe with any justice, mainly because the events unfold in a non-linear fashion. The movie opens with the demolition of longtime movie studio Gin Ei, which is going out of business after 70 years. Documentarian Genya Tachibana is filming a piece that looks at the studio's history, with his focus being the actress who was the focal figure of the company for much of its existence before disappearing and shrouding herself in an air of mystery.

Now an elderly woman, Chiyoko Fujiwara graciously agrees to meet with Genya and his cameraman Kyoji for an interview about her career. What unfolds is a story that develops on multiple levels as Chiyoko's real-life tale is juxtaposed with the plots that unfurl throughout the course of her filmography. At the same time, Genya is a very vital part of the plot as his devotion to the actress and his involvement in her life play an unexpected and subtle role in the developing story.

It seems that as a teenage girl, Chiyoko is courted by the head of Gin Ei Studios to become their fresh young face at the forefront of their pictures. Her mother strongly disapproves, believing that her daughter's proper course is to be a wife and a mother. Meanwhile, Chiyoko herself is unsure about relocating to Manchuria for an acting job until she literally runs into a man who appears to be fleeing from the law. She helps him evade the police, and as her reward she learns that he is a painter from Manchuria who is being persecuted for his beliefs. He gives her a key on a necklace that he claims is the answer to everything. After her new friend is again forced to evade authorities when he is discovered in her shed, he tells her that they will meet again someday.

Needless to say, the youthful Chiyoko is infatuated and determines to accept the job offered her by Gin Ei so that she can go to Manchuria and find her true love. What transpires during the rest of the movie is the story of her search as it plays out both in her daily life and in her theatrical roles. Using beautiful imagery, Millennium Actress transports the viewer through various eras of Japanese history -- the Edo Period, the Meiji Period, the Warring States Period, and even many years into the future. The truth and the fiction are seamlessly interwoven as one scene blends effortlessly into the next.

Always reminding the viewer that a story is being told, Genya and Kyoji are actually integrated into the action themselves. While a bit jarring, the device is very effective at helping the movie maintain a dreamlike quality. Millennium Actress definitely is meant to have times of eye-open awareness such as these, though, with earthquakes in particular signifying momentous occasions.

Much of the reason the movie succeeds is that both Chiyoko (who the viewer sees progress through an entire circle of life) and Genya are so likeable. Chiyoko may be one of the most beautiful animated characters ever to grace the big screen, and much of her grace comes from the fact that she is genuinely devoted to the cause of finding her true love. Even when she strays from the path, it eventually finds her again. As for Genya, he is a man intimately acquainted with the minutiae of Chiyoko's life, but he doesn't really come across as obsessive or creepy. Instead, there is always the feeling that he has good reasons, unknown though they may be, for his fidelity to a woman who has no idea who he is.

Beyond the sweeping story and the complex characters, the movie itself is dazzling to watch. Millennium Actress is as far from a typical animated film as one could possibly imagine; though the lush pictures and colors that capture the eye could only exist in the animated format, the characters are fluid, realistic and intricately drawn. Just as much attention is paid to the spectacular backgrounds. At times, snow is the focal point, but at other moments, the eye is drawn to the pink blossoms that dominate one portion of the scenery. The movie transports the viewer just as easily from flashes of beauty to reflections of devastation, as the terrors of war are given the same detailed attention as a cinematographically elegant piece of samurai history.

Though primarily only known up to now for his work on the anime series Berserk, Susumu Hirasawa does a fantastic job with the movie's score, combining themes of all sorts to support the action taking place in the film. Elements of romance, action, sadness and elation are all present, with a bit of a new-age, synthesized feel. It's strong work from a composer who should draw substantial interest for his talent, much like Joe Hisaishi has thanks to his collaboration with Hayao Miyazaki and Studio Ghibli.

By the time the credits roll, the journey to connect with Chiyoko and Genya is so profound that it's difficult not to be almost devastatingly emotionally affected. In a mere 87 minutes, the movie attaches the viewer so personally with its characters and ideas that the reward is well worth working through the complications. Millennium Actress is one of the best films of 2003 so far and stands alongside the productions of Studio Ghibli as some of the greatest international animated work being created today.

On a sad note, Jules Engel, an artist who began a career in animation in the late 1930s for Disney on films such as Pinocchio, Fantasia, and Bambi, passed away on Saturday at the age of 94. Although recently best known for his abstract paintings, his work as "choreoanimator" for the "Chinese Mushroom Dance" and "Dance of the Hours" segments of Fantasia was a key portion of that film's long-term success. Along with his painting, later in his career Engel began to dabble in experimental short films, and became the founding director of the Experimental Animation Program at CalArts, where he served as mentor to students such as Stephen Darnell (SpongeBob SquarePants), Henry Selick (Nightmare Before Christmas, James and the Giant Peach) and Eric Darnell (Antz and the upcoming Madagascar). While he might not be a familiar name, his contributions to the world of animation were vital and will leave a lasting impact on the artists he inspired.