Drawn That Way: Stitch! The Movie 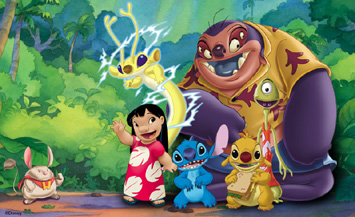 Generally, straight-to-video animated sequels are bad news. From Return to Neverland to The Jungle Book 2 to the upcoming The Lion King 1 ˝, Disney has worked through its catalog of animated hits and misses to try to turn a profit through character licensing and big-time VHS and DVD sales.

Though I had never subjected myself to one of these unfortunate follow-ups in the past, that all changed this week with the release of Stitch! The Movie. Yes, I realized that it’s really just a setup for the upcoming animated series this fall and that it would likely be unable to precisely capture the spirit of the original film, but the fact of the matter is that Stitch is one of my favorite animated characters in cinematic history and even a small, crappy dose of Experiment 626 is better than no Stitch at all.

Happily, Stitch! The Movie turns out to be a lot of fun. While it’s primarily going to find its biggest audience amongst children who will enjoy the raucous and goofy action and quotable jokes, there are also plenty of sly references there for the die-hard fans of Lilo & Stitch.

That’s not to say that it’s all perfect. Compared to the theatrical movie, the art in the straight-to-video Stitch! The Movie is more primitive, with less care given to the tinier details. There’s also a lot of repetition (Stitch does his reticent “Hi” three times with the exact same inflection and animation), but that’s a more standard type of technique in kid-targeted cartoons (as any episode of Pokémon will prove). We also get heavy doses of the Ohana theme, which was a complaint many had about Lilo & Stitch as well. It’s even thicker here, but again, that’s a function of being targeted to a specifically younger demographic.

Working under the Hawaiian notion that we’re all cousins regardless of blood relation, Stitch and his best bud Lilo discover that he is not unique to Dr. Jumba’s experimental history when the mad scientist – excuse me, evil genius -- is kidnapped by rival Dr. Hamsterviel. Apparently, as the 626th experiment, Stitch has 625 other unique cousins, all with a propensity to destroy any environment in which they are unleashed. It’s up to the little blue alien and his young friend to help Jumba and find Stitch’s very real family.

Given that the movie clocks in at a very brief 64 minutes, we definitely don’t get much character development of the new experiments; instead, it’s a fairly obvious set for the television series. That’s okay, though, because while both “cousins” have their moments, the movie works best when the primary characters are onscreen. Almost all of the original voices have returned to reprise their roles, including Daveigh Chase (Lilo), Chris Sanders (Stitch), Tia Carrere (Nani), David Odgen Stiers (Dr. Jumba), Kevin McDonald (Pleakley), and Ving Rhames (Cobra Bubbles). Jason Scott Lee as David is the only one conspicuously absent (though the new voice actor is fine in a much more minor role). Chase's voice has changed ever so subtly, but it's still good. ("Yeah, still good.")

The major new addition is Jeff Bennett as the aforementioned Dr. Hamsterviel. An accomplished voice actor who has worked in series from Johnny Bravo to Dexter’s Laboratory to Animaniacs, he infuses Hamsterviel with his best John Cleese as French soldier impression. It works, too, as the tiny villain is humorously evil despite being nearly as adorable as the Japanese icon Hamtaro.

Probably the most entertaining aspect of the short movie is the numerous allusions to the first film. For those who never paid much attention during Lilo & Stitch, such things will mean nothing, but it’s a wonderful little reward for the serious fan to hear near-throwaway dialogue reprised in many clever ways. Also, both Lilo and Stitch are as endearing as ever, with their hijinks rightfully being the true focus.

It’s probably all a matter of sitting down with the right expectations, but Stitch! The Movie is a commendable follow up to a near-perfect theatrical animated release. A briskly paced little adventure, it’s a well-done setup for an animated series that looks to be a big hit among its target audience.