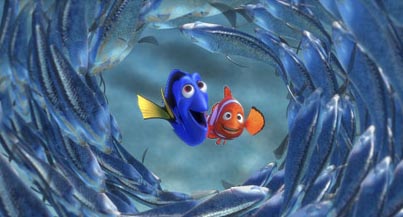 From the early exploration of complex character design in Bambi we now move on to take a look at a technological triumph -- Pixar’s newest release, Finding Nemo. Following in the footsteps of the CGI animation studio’s quartet of near-flawless releases -- Toy Story, A Bug’s Life, Toy Story 2, and Monsters, Inc. -- Finding Nemo is their most visually stunning achievement to date. The happy news is that the story is every bit as captivating as the colorful sea life that is captured onscreen. The result is a frenetic, joyous celebration of family, friendship, and individual growth.

The plot is deceptively simple. After losing his wife and all of his children except for one to a predator, clownfish Marlin is compulsively overprotective of his only remaining son, Nemo. Since Nemo has now hit school age, those instincts kick into overdrive, causing father and son to fight and Nemo to determinedly swim to a forbidden area of the ocean. He is caught by a diver and taken to an aquarium in Sydney, Australia, leaving Marlin to desperately search for his beloved child.

Marlin encounters numerous denizens of the sea as he travels the ocean and the Great Barrier Reef, with the most notable character being Dory, a dippy blue fish with short-term memory loss. While in Memento the conceit was used as serious and profound subject matter (with a few humorous moments), in Finding Nemo it is a hilarious joke that isn’t simply a one-off. She remains by Marlin’s side for the bulk of the film, but is much more than simple comic relief.

Meanwhile, Nemo makes the acquaintance of his fellow aquarium “inmates,” working with them to try to escape as quickly as possible -- particularly because the group has learned that the dentist who owns the aquarium intends to give Nemo as a gift to his Elmyra-like niece. As is consistently the case in Pixar films, what follows is a story full of classic film references and pop culture allusions, including The Great Escape, The Shining, Psycho, Jaws, and even Monty Python (if you sit through the credits, you might also catch a glimpse of a beloved Pixar character from the past, too).

As always is the case in Pixar productions, the voice talent in the film is exemplary and one of the primary reasons the movie succeeds on so many levels. The neuroses-laden schtick of Albert Brooks is perfect for Marlin, but it’s Ellen DeGeneres’ Dory that is the most pleasant surprise. In the hands (or mouth) of a less skilled performer, Dory could easily degenerate into a boring and repetitive cliché, but somehow DeGeneres makes every line sing. Sometimes we forget that before her television show lost its luster, DeGeneres was a brilliant stand-up comedienne. That manic sense of comic timing is certainly apparent here.

Another noteworthy voice turn comes from the always-terrific Willem Dafoe, who portrays Gill, the leader of the aquarium “prisoners.” His character falls somewhere between Jack Nicholson in One Flew Over the Cuckoo’s Nest and his own Sgt. Elias in Platoon. Barry Humphries (Dame Edna) is also essential in a smaller role as Bruce the Shark. A number of other more minor performers add unique flair to the varied assortment of supporting characters, including Allison Janney, Stephen Root, Vicki Lewis, Geoffrey Rush, Brad Garrett, Eric Bana and Pixar staple John Ratzenberger. Director Andrew Stanton also contributes by voicing a fine surfer-dude sea turtle.

Given the environment depicted in the film, there was never any doubt that the source material offered immeasurable opportunities to create gorgeous canvases filled with bright colors and lush oceanscapes. Pixar came through in every sense imaginable. The Great Barrier Reef rendered in the film is absolutely breathtaking, and the aquatic cast of characters is given fluid and natural life. Not only that, but the aquarium is an impeccable representation of the real thing. From the starfish on the side of the tank to the hidey-holes where the little fish find privacy, the indoor sea creatures are every bit as captivating as their ocean-dwelling cohorts. As far as the ocean goes, be sure to make special notice of the manta ray, the angler fish, and a shark that realistically has a remora attached.

The atmosphere is enhanced by a wonderful score from Thomas Newman. The music is actually a bit more mature than Pixar’s typical soundtracks, which have traditionally been handled by Thomas’s cousin Randy Newman. With subject matter such as toys and monsters, that more playful music was perfectly appropriate, but considering Finding Nemo’s slightly more serious overtones and thematic elements, the shift to the composer of such musical scores as American Beauty and Road to Perdition is quite apt.

In fact, for parents of small children, it should be noted that Finding Nemo has a number of scary moments that are much more extreme than what we’ve seen in the previous Pixar productions. The movie starts on a tense and also sad note because we actually see Marlin’s trauma caused by losing almost his entire family. Beyond that incident, there are some additional chase scenes that have the potential to be intense for the tinier tots.

Even so, these more solemn interludes are balanced out with lots of light-hearted levity. Finding Nemo is never so overwhelmed with profundity that it can’t break away with a quick joke (or a hilariously failed attempt to tell one). It’s a very subtle film about acceptance and loyalty - many of the characters in the film aren’t quite “normal,” and there’s a lesson about embracing those who are different that is imparted not by hitting viewers over the head but by making the various creatures so enigmatic and unique. Furthermore, the primary conformist characters -- the seagulls -- are strongly mocked for their simple single-mindedness.

As it turns out, Finding Nemo is a movie that resonates more strongly on reflection than after the initial viewing. Like its other Pixar brethren, the movie is a genuine pleasure for all ages, setting it apart from the pack as a shining example of excellence in a year where Jungle Book 2, Piglet’s Big Movie, and Pokemon Heroes are what passes for animated entertainment. Now, bring on The Incredibles!