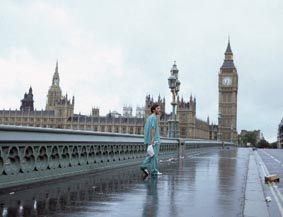 With a story that feels almost frighteningly topical in relation to the current SARS epidemic, 28 Days Later is more than just a simple horror film. Similar in theme and tone to George Romero’s Dawn of the Dead, the British production not only offers plenty of scares, it also affords plenty of ideological fodder for viewers to ponder.

The creepy scenario kicks off with an animal laboratory scene that has little actual carryover with the remainder of the film other than the fact that it establishes that activists who release the monkey test subjects manage to expose the world to a particularly virulent strain of virus. We quickly see that the results are catastrophic as a scene reminiscent of Resident Evil shows us a man waking up in a London hospital only to discover that he seems to be the sole human being left alive.

Jim (Cillian Murphy) soon learns that he’s not really alone. While wandering the London streets in a surrealistic scene that surely drew its inspiration from Alejandro Amenábar’s Abre los Ojos, Jim encounters some people who were pretty clearly affected by the virus, rendering them zombies. These aren’t your typical zombies, though, as they move very quickly and are very mobile.

Jim is rescued by another pair of unaffected individuals, and he learns what happened to the world while he was comatose. Civilization as we know it has been almost completely wiped out, with only a few pockets of healthy, non-zombies remaining. The scenes that follow are both sad and intense, with Jim uncovering the fate of his parents and becoming acquainted with some other survivors. Those who wind up traveling the countryside with Jim in search of some form of assistance include the fiercely independent Selena (Naomie Harris) and the father/daughter pair of Frank and Hannah, played by Brendan Gleeson and Megan Burns, respectively. Surprisingly, what they encounter is significantly more sinister than a world full of zombies could ever be.

28 Days Later offers up plenty of genuine scares and is constantly filled with suspense. Director Danny Boyle (Trainspotting) is able to evoke strong emotional responses from the audience both through the atmospheric and bleak settings as well as maintaining an air of mystery throughout. The cast is very capable though most of the players are mostly unknown on this side of the ocean, with perhaps the exception of Gleeson, a character actor who is memorable for minor roles in A.I.: Artificial Intelligence, Mission: Impossible 2 and Braveheart.

It’s a lot more than just a simple scary movie, though. Like the Romero “Dead” films that came before it, 28 Days Later examines interpersonal relationships and the politics that occur when the species sees itself threatened by decimation. In the case of Dawn of the Dead, Romero examines the dynamics of a small group that has to work together for survival in a shopping mall full of recently risen zombies. Not only must the small group battle the undead, but they also have to contend with a group of murderous looters. Can they overcome preconceived notions about their cohorts to survive, and will they be able to maintain any semblance of sanity in the process? Dawn of the Dead explores these issues while intermingling horror, humor, and pure splatter.

For 28 Days Later, a similar small group is assembled to battle a seemingly more dangerous bunch of zombies that have been violently infected by a horrific virus. This film relies less on humor and more on a slow-building sense of dread. Perhaps the best-designed element of suspense is the fact that other non-infected humans have just as much potential to be deadly killers as the zombies due to the fact that everyone who remains is reduced to sheer panic at the possibility that the virus could take them, too. The results are a perfect melange of psychological terror with straightforward scares and just a bit of subtle social commentary to boot.

Despite being set in the British Isles, the story feels universal and very in touch with current events. Though the film was actually released in Great Britain in December, well before the SARS epidemic became a serious concern, 28 Days Later hits very close to home. Though it’s obviously highly unlikely that mutant zombies will arise from any natural or man-made viruses, the fear and trepidation are very real and totally fathomable. The film is one of the better ones to emerge from the horror genre in some time, sitting miles above tripe like Jeepers Creepers and Darkness Falls. For anyone who enjoys their scary movies with a touch of intelligence, 28 Days Later merits serious audience consideration.

Read what He Said about 28 Days Later.