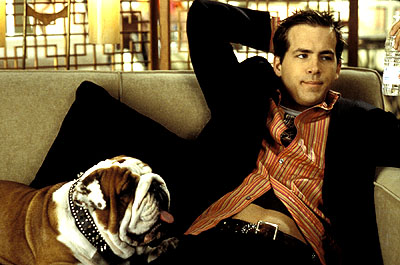 What is it about likeable teen flicks versus the not-so-likeable? How can movies as bad as Jason Schwartzman's Slackers be followed up by something as good as Van Wilder? Well, teen flicks need a few key things: hot chicks, toilet humor, and a big party or several. Most of all, they need to be consistently funny, and that's what Van Wilder brings to the table.

The premise of Van Wilder has Ryan Reynolds playing Van, a college student in his seventh year on campus; a mix of the Party Animal at College and Yoda. The story goes like this: after Van's wealthy father, played by Animal House alum Tim Matheson, decides to pull the plug on his son's seemingly lifetime tuition. Van is devastated, and is willing to do anything to stay where he is most comfortable, loved and adored: college. Van and his assistant, Taj, decide to raise funds for Van's never-ending tuition by throwing parties for students who would never be able to throw a cool party on their own. While partying, Van (of course) must win, lose and win again The Girl, here played by Tara Reid in a tired and unenthusiastic performance. Of course, Van must also face off against the snarly professor and the stuck-up fraternity boy along the way.

The great feel of this film is what makes it work. The historical precedent set down by such flicks as Animal House and Revenge of the Nerds is obviously seen here, but Ryan Reynolds deserves a lot of credit for the upbeat, fun tone of this film. Without his unrelenting charisma, this movie would just be another teen/college flick that has nothing special to offer and nowhere to go. Since the whole film revolves around Van, that charisma seems to inspire some of the supporting players in this film. Taj, Van's assistant, is played by Kal Penn and is at first stereotyped as the foreign-exchange student, but Penn and Reynolds don't let the stereotype play. Taj is able to grow as a character, thanks, of course, to the helpful wisdom provided by Van Wilder. Richard Cosgrove plays the stuck-up Elliot Greb, the fraternity boy/soon-to-be doctor who can't seem to get his head out of his ass. This is another tough role, and producers of this flick were smart to go with an actor who looks and sounds like the frat boy we love to hate. Cosgrove is reminiscent of Mark Metcalfe's Neidermeyer from Animal House, so anally retentive it looks like the poor guy is going to implode.

But it all comes down to consistent humor doesn't it? This movie is funny and again, it's all thanks to Ryan Reynolds. Reynolds' cool, doesn't-give-a-shit attitude is funny and charming, similar to Tim Matheson's Otter from Animal House. Describing the gags here would be cheap, so I will let you enjoy the film without too much spoilage. I will say there are the standards: revenge, sex with ugly people, and some tried-and-true toilet humor, but a lot of the jokes are fresh. Some have been used before, but in a genre that's been beaten to death since the first American Pie flick, it must be hard to keep inventing a new fart joke every two weeks. One of the writers here is Brent Goldberg, who scripted the much talked-about but little-seen Saving Ryan's Privates, so you should be able to get an idea of what you're in for.

Walt Becker, who used actors from a lot of older teen/college comedy flicks, directs Van Wilder. The aforementioned Tim Matheson would be better off playing Dean Wormer today, and Becker resurrects Curtis Armstrong (Booger in the Revenge of the Nerds) for a small role, and Chris Owen, who played the Shermanator in the American Pie flicks. The one disappointing thing that Becker and his writers chose was to use a line from one of my favorite films, Say Anything. Van mentions a couple of times in the movie that he needs to find a "dare-to-be-great situation," which is a classic Lloyd Dobler line from the 1989 Cameron Crowe flick. Van is a similar character, confused about his future, but I consider it more rip-off than homage.

Overall, Van is a fun ride, a definite check-your-brain-at-the-door kind of film. It's an excellent Spring Break sort of movie, albeit a couple of weeks late. The real find here is Ryan Reynolds, an actor I think we will see on the big screen again.