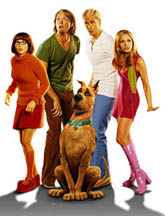 Before we get started...I think we all know this movie isn't going to win any Oscars.

The live-action version of Scooby-Doo has to be one of the worst-marketed films ever. Trailer: bad. TV ads: bad. Print campaign: bad. And that's forgetting the project itself; the casting is awful. Before the lights went down at the theater, I found myself asking the big questions, like, "What am I doing here if this is going to suck so bad?", and "Why am I going to sit here and watch WB destroy one of my most favorite cartoons?" As far as films go, I had lower expectations for Scooby-Doo than I did for Star Wars Episode II: Attack of the Clones.

So maybe it was my low expectations, but I left the theater not hating Scooby-Doo, but not completely overjoyed, either. The premise for this flick is fairly straightforward; the Mystery Inc. gang have become famous due to their expertise at solving mysteries, and now their egos are getting in the way of mystery solving, so the gang splits up. Fred (Freddy Prinze, Jr.) is full of himself; the media has framed him as the brains of the gang, which upsets Velma (Linda Cardellini), as she is obviously the smart one of the group. Daphne (Sarah Michelle Gellar) is tired of the damsel-in-distress role, and wants to change her image. Scooby-Doo and Shaggy (Matthew Lillard) are the rocks of the group, steadfast in their friendship and in their roles within the clique. The gang breaks up, but is mysteriously reunited to solve a mystery at an amusement park resort called Spooky Island, owned by Emile Moldavarius (Rowan Atkinson). Someone is turning visitors to the resort into zombies, and the gang has to stop it, of course. Now, if you can't figure where the story for this flick is going from here, I'm surprised you were able to read this far. I will say that there are some surprises along the way that really help the overall film.

To go deep into spoiler land a week before the release of this film would be unfair to the studio and to the reader, so at this point I'll do my best to break away from plot details. Warner Bros. and the production team of Scooby-Doo have done a remarkable job of keeping the details of this film under wraps; a very quick search of the Internet tells me that extremely sensitive plot details about this flick have not been leaked. Let me tell you this: If you don't want some of the only surprises of this film spoiled for you, go as early as possible.

The casting for this film is both brilliant and disappointing. The good includes Matthew Lillard and Linda Cardellini. Lillard's Shaggy is perfect. The guy got the voice, the body language and the complete feel of Shaggy. Even more importantly, Lillard was able to play off the CGI Scooby to the level that Shaggy and Scoob goofed together in the cartoon series. Lillard is perfect for both kids and adults; there is adult humor here, as a few jokes are made about Shaggy's pothead looks that kids will never get, but there is also a lot of comedy that is appropriate for children. Cardellini plays Velma, probably the toughest acting job in the group, as the cartoon made her: very plain and very boring. Cardellini brings some spunk to the character of Velma, and it's very refreshing. The bad, as usual, is Freddy Prinze, Jr. Why does this guy keep getting work? Hair dyed blonde, Prinze takes the character of Fred to new egotistic heights that were never a part of the cartoon. It's amazing the rest of the group wanted to keep this Fred around; I'm surprised they didn't kick him out of the moving Mystery Machine halfway through the film. Sarah Michelle Gellar was acceptable as Daphne; she had the character with the least to do, other than look good. Overall, it's too bad this wasn't one of those episodes where it was just Velma, Shag, and Scoob.

As for the character and design of Scooby-Doo, it wasn't bad for the most part, and the crew will manage to avoid comparisons to Jar Jar Binks. I'm still having a few problems with a completely CGI character in a live-action film. Scooby has some scenes where he doesn't look real at all, and some scenes where it's the exact opposite. The voice of Scott Innes is perfect; he is able to draw the viewer back to the character with his voice when there are problems with the animation.

Director Raja Gosnell brings an interesting feel and look to this film, but, like Mystery Men, the good things just don't quite outweigh the bad. The effects are great; the story has some weak spots. Three actors are great, two are not. I saw this film in a packed theater, and there were too many quiet spells during the film. This film didn't have enough laughs, and it's too bad Gosnell had to reduce the material to an extended fart joke sequence that may have got the biggest laugh of all.

Are fans of the series going to like this film? It's hard to say, but I think the film will be liked by some and detested by others. It just didn't seem to have enough of the characteristics of cartoon series. It's a shame they didn't do it like 1995's The Brady Bunch Movie, where the characters didn't quite fit in with the real world, but somehow managed. Overall for Scooby-Doo, I'll look forward to a sequel without Freddy Prinze, Jr.

Six out of ten Scooby Snacks